This is a leap year for Ford trucks. Not in the Gregorian calendar sense, but rather in the technological realm.

With the official introduction of the 2015 F-150 and its truckload of advancements, Ford has literally jumped at least a year ahead of its full-size competitors. Maybe more.

Driving the new F-150s around the San Antonio area while pulling 4 ½-ton box trailers, running empty, doing a short off-road loop, and playing a little on a parking lot slalom course reveals a lot about the new pickup – and it’s competitors, the Ram and Silverado 1500s.

The real eye-opener of the all-aluminum-body pickup isn’t so much about ditching the conventional steel bodywork as much is it is how shedding 700-plus pounds sets the stage for a host of other improvements that make pre-2015 F-150s obsolete.

This small (by traditional pickup truck engine standards) twin-turbo’d engine, with a block cast from the same compacted graphite iron material as the 6.7L PowerStroke diesel, makes 375 lb.-ft. of torque. That’s enough to give a 2015 F-150 equipped with it a maximum towing capacity of 8,500 pounds or carry a payload up to 2,250 pounds.

The little V-6’s high power output and the truck’s reduced weight give the 2015 F-150s an eight-percent power-weight ratio advantage over similarly equipped GM pickups running the 5.3L V-8, a five-percent advantage over the Ram 1500s with an EcoDiesel, and a three-percent edge over Hemi-powered Ram 1500s.

From a fuel economy perspective, it should rival the numbers of the EcoDiesel, because of the smaller displacement and auto start-stop technology. (Ford says EPA numbers should be released in late October or early November.)

Driving a 4×4 equipped with the 2.7L EcoBoost feels like driving a V-8. It even has the throaty, yet muffled exhaust note of a small-block V-8.

Ford’s EcoBoost V-6 pulls strong from low in the rpm range right up to their redlines. The smaller of the two, the twin-turbo 2.7L, responds faster to changes in throttle position with quicker downshifts. There’s no “turbo lag” thanks to the small turbos being bolted on to the integrated exhaust manifolds that tuck tight against the heads.

The new V-6’s fuel-saving start-stop feature is smooth, so much so after the first couple times you don’t really pay much attention to the engine shutting off every time you stop the truck.

Ford says the start-stop feature, which automatically disables in the tow/haul mode, or via a driver-activated disable button on the dash, adds one mile-per-gallon to the city mpg numbers.

The smaller of Ford’s two EcoBoost V-6s, which was designed for (and debuts in) the 2015 F-150s, will find its way into Ford’s other SUVs. And rightly so. It’s smooth and surprisingly strong – a perfect match for those who need a pickup, but aren’t using it to tow every day or to pull trailers that are overly heavy.

By that I mean the 2.7L EcoBoost would be an ideal engine option ($500 over the naturally-aspirated base 283hp 3.5L TIVCT V-6) for the buyer who will be using it more for commuting and light trailer towing (trailered loads less than 4,000 pounds a few times a month) than using the truck as a half-ton workhorse.

That’s the engine fleet owners – like landscapers, DOT and utility companies – will find provides the best towing fuel economy for trailered loads in the 4,500-7,500-pound range.

That brings us to the third engine option. If you’re a business owner who needs towing muscle, yet needs the non-towing fuel economy benefit of a V-6, then opting for the 365hp 3.5L EcoBoost V-6 would be a good choice after my stints driving both EcoBoost engines and the V-8.

The 3.5L version is the most fun to drive off all the four engines Ford offers in the F-150. It has more torque (pulling power) than the V-8, responds to hard throttle faster than the 5.0L, gets far better fuel economy unladen, and has the highest tow rating across the F-150 line-up.

The 3.5L will smoke a 5.3L, Hemi or EcoDiesel in a drag race or trailer pulling contest with all things being equal. Short run or long pull, it’s just a smooth, stout power package.

The only downside I see is the smaller engine displacement takes a hit in fuel economy under load where it drops down to, or below, that of the 5.0L V-8. That’s because six cylinders require more fuel to get the same load moving and maintain the same speed as the bigger engine.

Hence the reason buyers of the 2015 F-150s who tow trailers weighing more than, say, 4,500 pounds on a weekly or daily basis, would probably be happier all around with the 5.0L V-8.

On the other hand, if those towing needs are fewer than a half-dozen times a month, then the 3.5L would be my first choice because of the fuel economy and power advantage. In some F-150 configurations the 3.5L is rated to tow 12,2000 pounds under the SAE J2807 rating system. 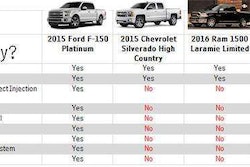 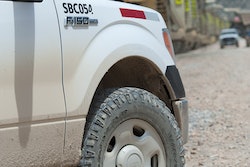 Rental of Fleet Pickups On The Rise 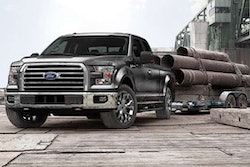 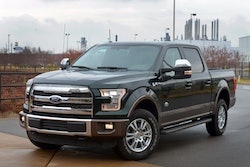