Kenworth’s newest heavy-duty entry, the T880, is scheduled for production for the latter part of this year, but I trekked to Washington this week to get my hands, and right foot, on one a little sooner.

I was able to pilot Kenworth’s Solar Flare Red (which is really more of an orange) machine around Paccar’s test track in Mt. Vernon, Wash.

Disclosure: The 24-foot flat bed model I spun a couple times around the mile-plus track – and jumped in the passenger seat for a 10 mile stretch through town – lacked a fairly key component: a load. But the lack of additional weight gave some good insight to just what a practical driver this heavy hauler really was.

The 273 inch wheelbase truck was surprisingly nimble, thanks to the standard MX-13 engine mated with an Allison 4500RDS, automated six speed transmission. The air disk brakes were responsive and powerful, bringing the spec’ed Class 8 truck to a full stop in reasonable fashion. Additional breaking help comes from a dash-mounted exhaust brake switch, which provided some aggressive downshifting.

The Primaxx rear air suspension really hugged the pavement, especially considering we were loaded down with nothing more than two people and fuel. I fully expected to skate the backend through the turns, especially with 455 horsepower hauling only its own weight. I also expected to bounce the truck through much of the track, and across the highway.

Simply put, that didn’t happen. Not even close.

All 22.5 inch tires held firmly to the ground for a comfortable – if not a downright pleasant – ride.

Will such a large engine under the hood, cabin noise was surprisingly low thanks to its triple-sealed doors.

The new T880 is for vocational applications and can be spec’ed for dumping, mixer, refuse, and heavy haul. If heavy hauling is your game, the truck can be spec’ed with with the Cummins ISX15 engine.

The biggest drawback on this truck as far as I’m concerned is that truly awesome bright Solar Flare orange color is not a production color. 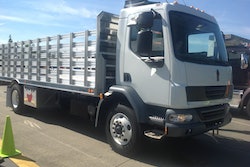 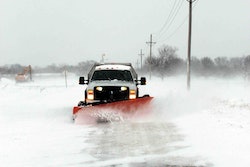 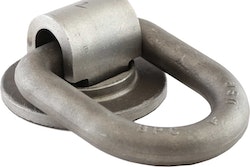 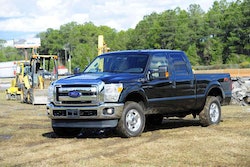