Electric truck in works at Nissan

Nissan announced last week the company would launch an electric cargo van in 2014, and hinted that a companion light-truck model might not be too far behind.

Based on the European NT400Cabstar, and known as NT400 Atlas in Japan, Nissan says the truck uses a high-output, high-capacity lithium-ion battery powering the 80kW electric motor, delivering a cruising range of 87 miles.

The e-NT400, still in its development phase but Nissan says plans for production under study. The truck uses Nissan LEAF running gear to create a zero-emission 100 percent electric vehicle.

Like e-NV200 cargo van, Nissan says the e-NT400 would be able to enter city areas denied to conventional vehicles powered by diesel or petrol engines, while its near-silent running means it could operate around the clock as it creates no noise or emission nuisance.

With a cruising range of 87 miles in NEDC mode, and features the availability of fully integrated Quick Charging potential – allowing the battery to be charged to 80 percent capacity in an hour. 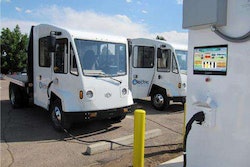 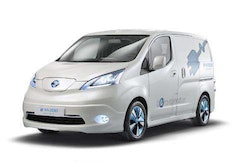