Although I see plenty of snow during the winter months driving the roads in Oregon’s Cascade Range, there usually isn’t much on the valley floor where my office is in Eugene.

But this winter was different and I had a pleasant surprise on a recent morning to find the ground blanketed in fresh snow.

Mother Nature must have known the previous work day ended with getting a set of Hankook I*Pike RW 11 winter tires mounted on my Super Duty and she was doing her best to make this particular tire review easy.

The I*Pikes under my F-250 4X4 Super Crew look every bit the part of a dedicated snow and ice tire, too. The tread design feature lots of tread blocks with a good amount of void for snow cleanout. The tread blocks are all cut up, which is a good thing in a winter tire because all those kerfs, also known as siping, greatly increase the biting edges of the tire tread.

Hankook engineers maximized the kerfs in the siping of the I*Pikes by including a large number of zigzags in the kerf cuts. More zigzags mean more biting edges to grip the road surface or ice.

I also noticed that the RW 11s have a V-shaped tread design that should mean improved grip, water movement, and mud cleanout while reducing road noise. The design also incorporates a distinct center block where other snow/ic tires have a void. (This, I was to learn, was a highly kerfed zone for improved stopping grip on ice.)

The I*Pikes are pinned for studs. What is less apparent is the studs are arranged in six distinct orbits on the tire, which doubles the opportunities for studs to bite the ice when compared to most other stud layouts.

As part of the studdable characteristics, Hankook engineers designed this tire with a special rubber layer with increased hardness to absorb stud shock and prevent the studs from penetrating the inner walls of the tire.

The tread blocks themselves feature a tiered groove designed to add stability for improved cornering and better steering feedback. Indeed in our testing, we found the RW 11s have a firmer cornering feel than other soft tread compound snow tires we have previously tested.

Hankook calls one aspect of the tread design “stone ejectors” – built in shoulder grooves to prevent tire damage from rocks getting stuck in the tire treads.

However, following our gravel road testing on 3/4 minus crushed rock, I found some rocks in the tread, which is pretty common with soft tread compounds.

I tested our Hankook snow tires in a variety of winter driving conditions from heavy rain on the valley floor to snow and rain mixed, to heavy, wet snow in the higher elevations. The I*Pike Hankooks performed better in every environment compared to the more typical all-season and mud-traction tires I normally run on my truck.

In the snow, I also saw how well the voids in the tires cleaned out. It was pretty cool to see the tread pattern displayed so clearly in the snow. A tire’s ability to release surface materials is important so the tread blocks can continue to present multiple biting edges to grip the road.

Driving in traffic is always a dicey part of winter driving. The I*Pikes instill a higher level of driving confidence because of their grip on slippery road surfcaes. Of course you’ve still got to keep an eye on the other guy who may not be running I*Pikes.

An added bonus of replacing all-terrians or mud-tires with Hankook’s RW11s is they don’t drone at any speed. They just quietly go about their task of keeping as much grip under your truck as possible despite what Mother Nature throws your way.

I may not see dry pavement until late spring and will undoubtedly be driving in snow to get to some jobsites through the winter. So I have no doubt these Hankook I*Pike RW 11s are going to be a good tire choice for the months ahead.

When you buy snow tires, you have a big decision to make before they are mounted: Studded or not? To have tires studded they must be “not mounted on the wheel and brand new,” says Rob Benson of the Tire Factory in Eugene, Oregon.

There are two concerns here. “A tire that has been driven may have debris in the pins (the little holes that accept the studs),” says Benson. This debris effectively extends the length of the stud and could push through the tire’s inner wall.

Second, worn tires have less tread depth, which could cause the studs to push through. You have to decide, studs or not, before you mount the tires. 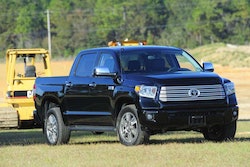 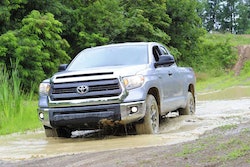 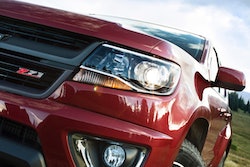 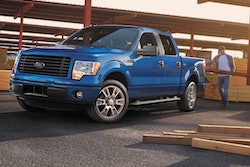