Aggressive traction tires have been a necessity on most of the vehicles I’ve owned over the years. Thick tread blocks with big open voids seem to always work when other tread designs fall short.

They have pulled my vehicles through the nastiest of mud from the logging roads of Southwestern Oregon to highway builds in central Alabama. I’ve relied on mud tires to traverse backroads in the Rockies to the deserts in the Southwest for both work and recreation.

So when I find a “mud tire” that has a good tread design and adds an element of attitude to a pickup’s looks, I smile.

The Nitto Trail Grappler M/T does just that; it’s a moderately-aggressive mud tire that delivers excellent traction in demanding conditions, but without as much roar-and-whine as the Nitto Mud Grappler favored by many die-hard off-roaders.

The combination of black sidewalls and black wheels instantly gives any pickup that industrial, no-nonsense look.

Some 500 miles later the Nittos had been subjected to all levels of use from high-speed interstates to the gravel, rock, mud and sand found on off-pavement jobsites. The smile is still there; the treads dig in and kick out debris with ease so traction is never compromised.

As Nitto’s tech bulletin says, the Trail Grappler M/T blends some of the off-road ­performance of the Mud Grappler with the on-road comfort of the Terra Grappler, to create a tire that is both aggressive and quiet.

This 3-ply tire isn’t as quiet as the all-terrain, but neither does it emit the high-speed whine or low-speed growl of Nitto’s dedicated mud tire. In fact, Nitto says this hybrid is about 35 percent quieter than the Mud Grappler.

(During our 100-mile highway test the sound meter stayed about 4dB above the OE tire sound levels at 70mph, which is slightly quieter than we recorded with BFG’s KM/T2 mud tires we tested last year.)

I did feel a slight vibration at city driving speeds from the lugs. But neither the vibration nor the noise is to the point of being objectionable.

The M/T also has good sidewall and tread face puncture/abrasion resistance—traits contractors like to see in a pickup tire.

Nitto says this tire incorporates an all-season rubber compound with two steel belts and reinforced grooves in the outer lugs to help maximize tread life, which we expect to be in the 35- to 45,000-mile range for most contractors’ pickups.

With a retail price around $260, the Nitto Trail Grappler should catch the attention of those who need a traction tire that would be a nice fit on any company foreman’s pickup. 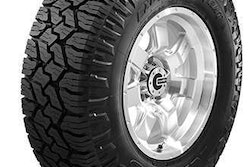 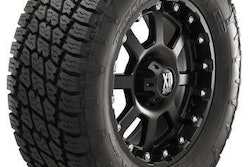