A “weak link” usually refers to just a bad part of a chain. The more complicated the product, the more chances there are for those weak links to show up. That’s especially true when it comes to pickups subjected to the rigors of the construction world.

Thankfully, weak links on most of today’s newer pickups are relatively few and far between; the trouble areas are worked out as each new model evolves from the previous one.

Still, weak links exist. On hard-working pickups the number of trouble spots can be not only far more numerous, but also an expensive pain in the neck with the resulting downtime and repair costs adding up at the end of the year.

Taking preventive action to repair or replace the weak link can keep your truck on the road and reduce those year-end maintenance costs.

Given these facts of working life, we gathered a list of weak links that can cause breakdowns.

The shop owner who provided most of these practical tips is Tim Anderson of T&A Performance, who has many years of experience servicing both city and commercial fleets in Northern Nevada.

Anderson has a working familiarity with contractors and their pickups, and has given us a handy checklist to help with routine maintenance that will keep you one step ahead of impending repairs.

What surprised us was not only how many we came across, but also how simple some of the fixes can be.

Of course, some repairs are inevitable, but knowing what you’re up against might help you make the right choices so you’re not caught unaware by a possible “lemon issue” on a particular make or model of pickup.

Anderson says 2003-2012 Dodge Ram 2500/3500 4×4 pickups can suffer from a lack of steering stability, especially when the front wheels have been unloaded while towing

a heavy trailer (another reason to use a weight-distributing hitch). He claims the steering wobble also arises during sudden changes in speed due to braking or accelerating, and can be worsened by larger tires or lifting the suspension.

Fortunately, the cause is fairly simple – flexing or deflection where the steering box mounts on the frame. When the box moves, steering inputs don’t accurately control the vehicle’s direction.

The Fix: Install BD Diesel’s (dieselperformance.com) Steering Box Stabilizer (SBS) and an Adjustable Track Rod. Both can be easily installed in less than half a day. Consisting basically of a sturdy box beam, the SBS braces the frame rails together transversely using the stock front sway bar mounting points. Additionally, a steel plate surrounds the sector shaft, secured by a longer nut riding in a heavy-duty bearing assembly.

GM’s 2002 and later 2500HD Silverado/Sierra pickups have a problem with excessive toe-in under acceleration caused by a factory design flaw in the steering system that allows the pitman and idler arms to wear prematurely, causing steering play.

The Fix: Cognito Motorsports’ (cognitomotorsports.com) Pitman and Idler Arm Support Kit is designed for stock-height 2500 pickups as well as lifted trucks with the steering in the stock location. This steering support kit braces the pitman and idler arm, and prevents the centerlink from rocking forward and backward, to minimize changes in the toe setting.

To be fair, Dodges aren’t the only pickups with steering problems. On ’04 and earlier

Fords, the pitman arm nut tends to back off, causing steering play that can shear off the steering box’s pitman arm, especially on a lifted suspension.

The Fix: Replace the output shaft (pinion) on the steering box with a heavier-duty version such as those found on the ’05 to ’10 steering boxes.

Some models of GM 4WD pickups are experiencing premature brake and fuel line corrosion and failure. Primarily affected are the ½ and ¾-ton vehicles from 1999 through 2005. The routing of these factory mild-steel lines tends to trap dirt, moisture, salt and road debris, resulting in rust and leaks or even complete failure.

If brake fluid is not maintained, the lines can rust from inside out due to the absorption of moisture. Anderson says if the brake fluid is black, it’s time to change it.

The Fix: Classic Tube (classictube.com) offers fuel and brake-line kits made of stainless steel that resists rust and salt deterioration. They can be ordered with stainless steel end fittings for additional protection.

EGR valves in diesels are on the front line in the fight for cleaner air and better fuel economy. But in doing so they are right in the flow of the exhaust gases, which eventually take their toll on the EGR’s ability to function properly. This leads to poor idle quality and a drop in cruise mpg. The EGR’s demise can be hastened if you run poor-quality diesel. Without sufficient cetane in your diesel fuel, the EGR valve tends loads up with carbon deposits (right).

The Fix: Use Motorcraft PM-22-A Cetane Booster. Ford’s cetane additive can help to prevent this problem and is generally beneficial for all brands of diesel pickups.

As a result of engine torque and vibration, GM’s LLY (2004.5-2005 VIN Code “2”) diesel-injector wiring harness pulls on the connector at the injector. This causes it to arc out (note dark smudge on the orange gasket), shutting down one injector bank and sending the truck into “limp-home” mode.

The Fix: GM Wiring Repair Kit (Part # 98017958; $225) corrects this issue. It’s a necessary, but detailed and difficult process to replace, as you are cutting into the wiring harness.

The spark plugs on a Ford Triton three-valve engine have a two-piece design that can come apart when they are being removed because of carbon buildup, leaving one portion in the head – or worse, in the cylinder. If the plug breaks it could mean pulling the heads to effect repairs.

The Fix: Matco has a removal tool that works faster and better than Ford’s for extracting the remaining piece without removing the heads. Note that the latter procedure is really costly, so better to catch this one early and also use the right tool for the job.

2001-newer GM pickups that are used hard off-pavement, especially those running lift kits and larger tires, have a tendency to snap outer tie-rod ends. Diesel 4x4s seem to be the most vulnerable.

The Fix: Cognito Motorsports’ (cognitomotorsports.com) CMS HD Alloy tie-rods use an all-steel alloy inner ball-and-socket joint that is said to be twice as strong as OEM. They come with a 5-year limited warranty.

While aftermarket upgrades are generally regarded as an improvement over stock,

that’s not the case with Powerstroke fuel filters. They are better than aftermarket. The stock fuel filters for 6.0 Powerstroke diesels are taller and have a better O-ring mounting seal than certain aftermarket units, and they’re covered with a wax membrane to separate water from the fuel.

Another added feature of the stock filter is a vent hole that allows the entire filter element to purge air. Aftermarket units without this feature tend to filter on only one side, as shown in the contrast between the light and dark areas shown on the filter to the right.

The Fix: Use only stock Ford fuel filters. The difference in overall performance is simply not worth the small amount of money you might save on a non-factory filter.

The Ford 6.0L on ’05 and later pickups uses a two-piece STC connector (left) for the high-pressure oil pump to the branch pipe. This unit inevitably blows apart. When the two-piece part fails, a couple of different things can happen; some are bad, and some are worse: If the O-ring blows out, the high-pressure oil that normally operates the HUEI injector system instead drains back into the oil pan, or the STC connector comes apart at high velocity. Like a bullet fired from a gun, the connector will bust through the engine cover. Then, you have to either pull the engine or the transmission just to repair the cover. In a worst-case scenario, it can also break the branch pipe that feeds both cylinder heads.

The Fix: Replace the connector with Ford’s one-piece part before the two-piece STC connector fails.

Beware when servicing GM’s Duramax. The filler drain and bleeder screw for the fuel

filter on a 6.6L Duramax are made of plastic and tend to strip out if over tightened, or even blow out if you run an aftermarket fuel system. This happens with modified or stock engines.

The Fix: Anderson says billet aluminum components from Merchant Automotive (merchant-automotive.com) correct this weak area. Tip: An aftermarket fuel-air-water separator can increase the injector life span by about 50 percent on the first-gen LB7s.

If your 7.3L Powerstroke takes an excessively long time to start when it’s cold, runs rough  on an intermittent basis, idles poorly, stumbles or hesitates on acceleration, or has shown a drop in mileage and stalling upon acceleration, there’s a really good chance the cam position sensor (CPS) is bad and it never received the recall fix. If the sensor is black with gold bracket it’s the problem child.

The Fix: Swap out the bad CPS with the replacement version (gray with silver bracket). They cost less than $40.

cab-chassis is matter of when, not if. This delamination causes clogged fuel lines, among other serious mechanical problems. 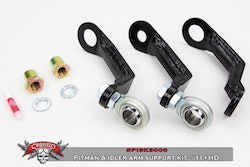