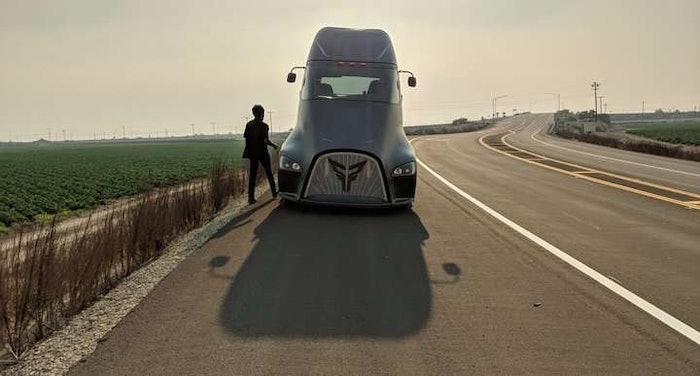 Hard-and-fast cost-per-mile comparisons between electric-powered and diesel-powered tractors are difficult to pin down. For one, electricity costs can differ dramatically based on geography and the utility provider.

Another variable is that as more electric vehicles are deployed, utility companies could institute dynamic pricing models based on time of day and current grid demand, says MIT energy economist and researcher Jing Li. “That doesn’t really happen in the existing electricity system we have, but some utilities are beginning to experiment,” she says.

Thor Trucks co-founder Gio Sordoni pegs electricity costs at 7 to 12 cents per kilowatt-hour, “which would translate to an 18-cent cost per mile,” he says. Sordoni estimates diesel’s per-mile cost at 56 cents based on a 5.2-mpg average and $2.90-a-gallon diesel. “You’re looking at more than half the cost,” he says, depending on the price of diesel, mpg and electrical costs.

Tesla, which estimates electricity costs at 12 cents per kilowatt hour, said in November it projects savings of $200,000 on fuel costs per one million miles compared to a diesel-powered tractor.

Nikola, aiming to make its cost comparisons a simple monthly calculation, offers its truck as a full-service lease, which includes a million miles of free hydrogen fuel and maintenance in Ryder’s nationwide network. The lease costs between $5,000 and $7,000 a month. That’s about on par with the $6,000-plus monthly average for an owner-operator’s truck payment, fuel and maintenance, according to owner-operator business services firm ATBS.

Tesla, Nikola and Thor promise maintenance costs dramatically less than that of diesel-powered rigs due to the markedly different components.

“Combustion engines have about 2,000 moving parts,” says Sordoni. “Our electric vehicle has about 20 moving parts. The systems in our vehicles are less complex.” Thor estimates maintenance costs for its ET-One to be about a third of that of a diesel truck.

Telsa’s Elon Musk noted the same in November at his Semi’s launch event. He said the lack of an engine and transmission, among other components such as an exhaust aftertreatment system, cuts maintenance needs.

However, at least initially, some potential buyers have questions about the new technology’s unknown costs. “I’m not going to be the first to own one,” says owner-operator Ken Bebout, who runs team with his wife. Bebout’s got a keen interest in adopting an electric truck, likely a Nikola, but wants all issues ironed out before he leaves diesel behind.