The American Trucking Associations was among 27 business groups to file an appeal to the U.S. Supreme Court on Dec. 17 after the Sixth Circuit Court of Appeals lifted the stay on the Biden Administration’s COVID-19 vaccine mandate for employers with 100 or more employees.

The mandate has been on hold since Nov. 6, when the Fifth Circuit Court of Appeals granted an emergency motion to temporarily stay the Occupational Safety and Health Administration’s rule’s enforcement.

The Sixth Circuit Court of Appeals in Cincinnati ruled Dec. 17 that, contrary to the Fifth Circuit’s opinion, OSHA does have the authority to require such a mandate. The court cited provisions in the Occupational Safety and Health Act that established OSHA that reinforce OSHA’s authority to regulate infectious diseases and viruses.

The three-judge Sixth Circuit panel voted 2-1 to reverse the stay. The one dissenting judge, Judge Joan L. Larsen, agreed with the Fifth Circuit’s opinion that OSHA did not have authority to issue the mandate.

The American Trucking Associations on Monday said it has taken its legal challenge to the mandate to the Supreme Court.

“It’s evident that OSHA overstepped its statutory authority with this Emergency Temporary Standard, so make no mistake: ATA will not stop fighting this misguided policy until our members and industry are fully relieved from its harmful impact on our ability to keep America’s supply chain moving,” said ATA President and CEO Chris Spear. “That includes the movement of food, fuel, medical supplies, test kits, and the vaccine itself.” 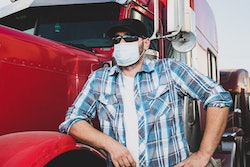