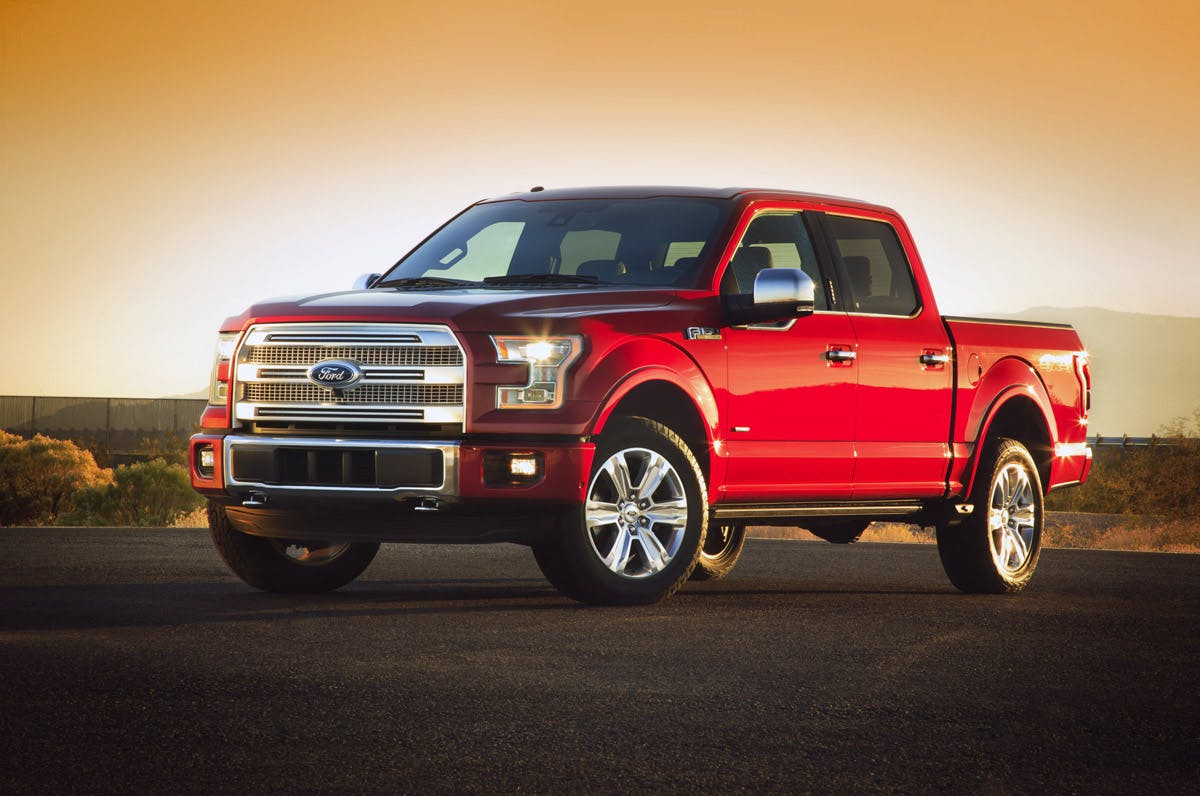 Today is a game changer for Ford.  They finally put the rumors and speculations to rest as to what the next-generation F-150 will be.

When the official unveiling happens this morning, the world will see an all-new F-150 Ford that will have many buyers-both commercial and consumer-passing on the 2014s.

Ford says the new truck will deliver an impressive combination of power, capability and efficiency – from advanced materials that improve durability and inhibit corrosion.

“The all-new F-150 redefines the future of trucks, and it is yet another example of our One Ford plan producing vehicles that serve customers with a commitment to the very best quality, fuel efficiency, safety, smart design and value.”

In designing the backbone of the F-150, Ford engineers improved the truck’s signature fully boxed ladder frame. It is all-new with more high-strength steel than ever – making it stronger and lighter. 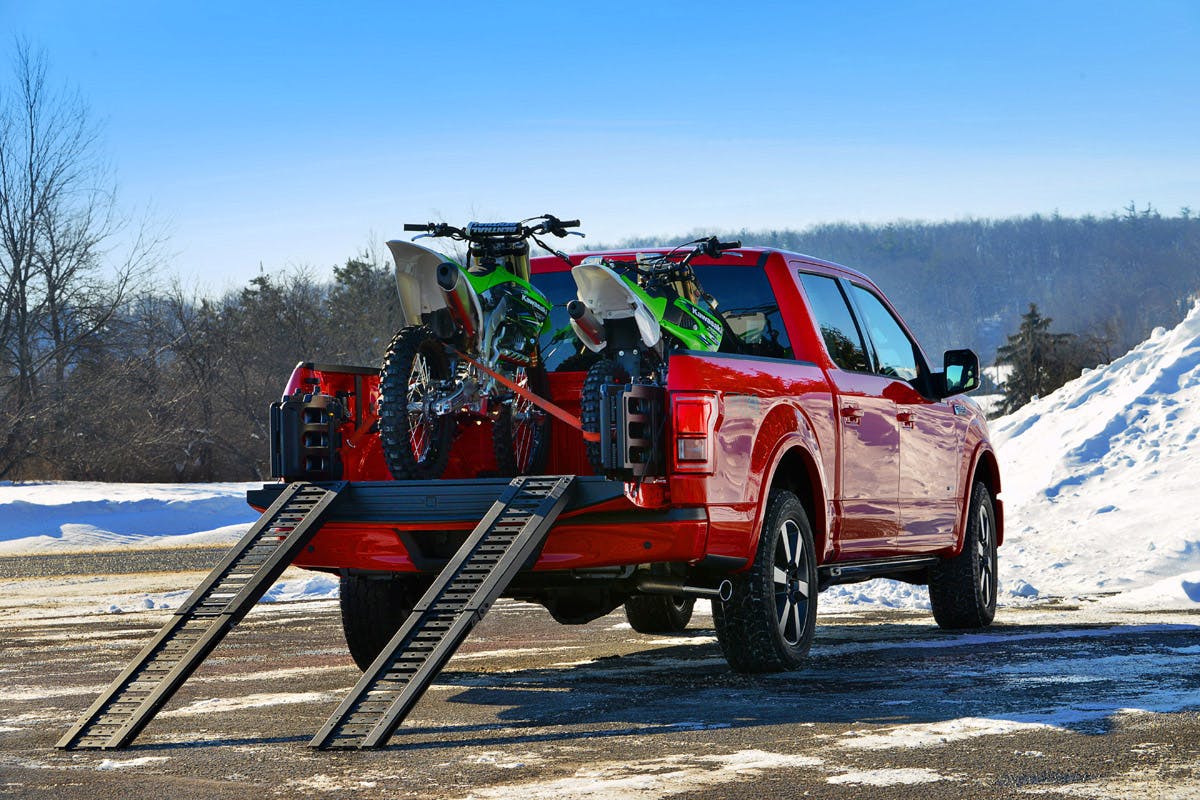 High-strength, military-grade, aluminum alloys – already used in aerospace, commercial transportation, energy and many other rugged industries – are used throughout the F-150 body for the first time, improving dent and ding resistance and also saving weight.

Overall, Ford says up to 700 pounds of weight have been saved on some models, helping the F-150 tow more, haul more, accelerate quicker and stop shorter, and contributing to efficiency.

“More than ever before, customers want a truck that is a dependable partner, mobile office and a go-anywhere workshop,” said Raj Nair, Ford group vice president, Global Product Development.

“To meet the needs of our truck customers, we created smart new features and a whole new approach to using advanced materials and engines to improve capability and efficiency.”

Ford says the 2015 Ford F-150sets a new level of strength and durability for the line.

Before it goes on sale, it will have been torture-tested in labs, at Ford proving grounds and in the hands of some of Ford’s most demanding truck customers for more than 10 million miles.

The grueling testing simulated the demands Ford’s customers will subject the truck to throughout its average lifetime. The tests include crisscrossing the country pulling heavy trailers and hefty loads through desert valleys and over high-altitude mountain passes – in temperatures from 20 degrees below zero to 120 degrees Fahrenheit.

(A stock version even competed in the recent Baja 1000, completing all 883 grueling miles while some other purpose-built race vehicles could not.) 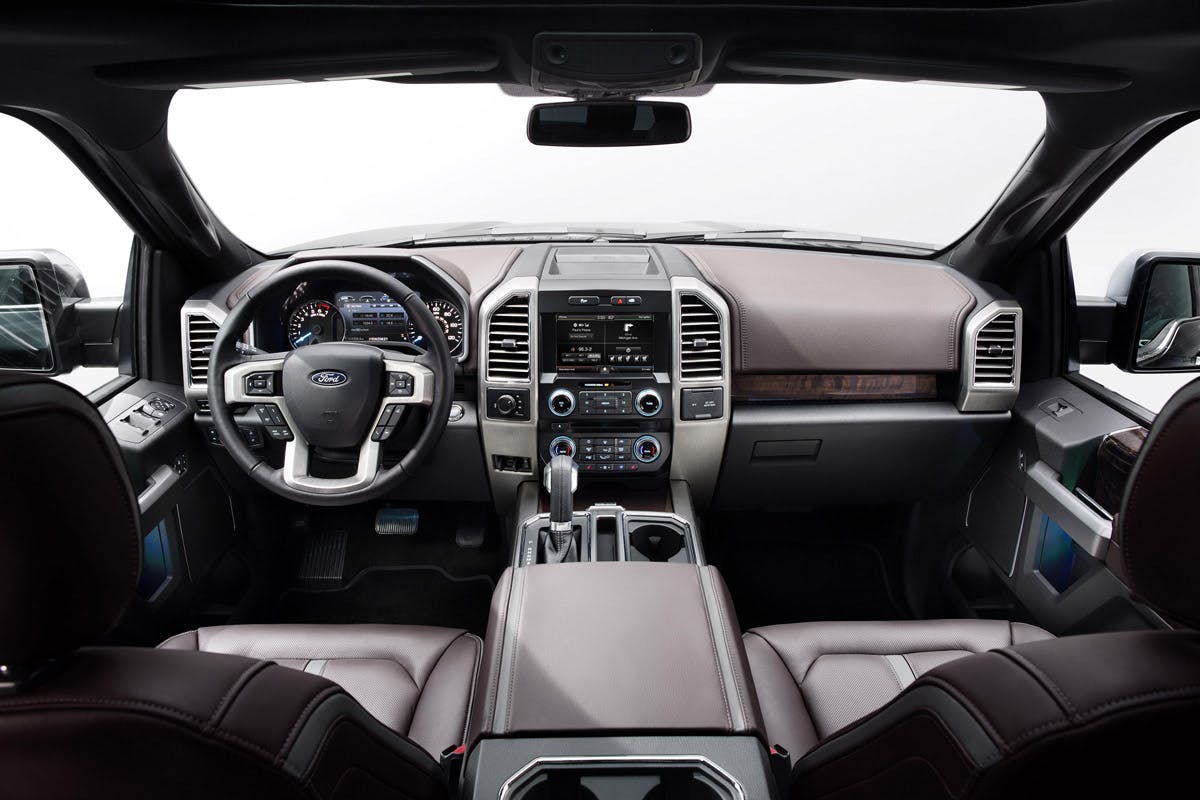 The interior is wider,  the center console deeper, and storage under rear seat all add to the new mobil office. (Click to view larger.)

To perform in these challenging conditions, the frame uses high-strength steel rated up to 70,000 psi – stronger than the steel found in some competitors’ heavy-duty pickup truck frames.

Several groundbreaking new productivity features debut in the all-new F-150, including many class-exclusives. They include:

The 2015 F-150 also features a number of segment-first technologies that automatically assist drivers to be safer. They include:

On the power side, Ford changes course in the power and performance side by dropping the 6.2L V8 and base 3.5L V6, and  adding a new 2.7-liter EcoBoost with standard Auto Start-Stop technology and what Rod says “has the same power as some mid-range V8s.”

When it goes on sale late this year, the 2015 F-150 will continue offering the same trim levels as the current model: XL, XLT, Lariat, Platinum and King Ranch.

The FX4 package, which adds  electronic locking rear axle, skid plates and off-road-tuned shocks, is available in most 4×4 versions.

“Once again, the Ford F-150 establishes new standards in durability, capability, technology and efficiency to help F-150 owners be more productive 24/7 – whether for work or weekend fun,” said Nair.

The F-150 will continue to be manufactured at Ford’s Dearborn Truck Plant in Dearborn, Mich., and Kansas City Assembly Plant in Claycomo, Mo. 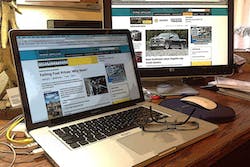 Spec’ing Out Your Next Work Truck: A Fleet Manager’s Perspective 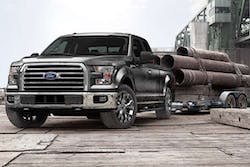