Another Ford Ranger prototype has been spotted—this time on a Colorado highway.

The Fast Lane Truck posted video recently on their YouTube site showing the camo-clad truck rolling down Interstate 25 in Colorado Springs (see video below). Ford’s mid-size truck is expected to re-debut next year as a 2019 model.

As you’ll see, the front clip recalls more of the Toyota Tacoma than the F-150 or its tough GM competitors, the Chevy Colorado and GMC Canyon. The four-door cab is a nod to the F-150 SuperCrew and a reminder that the Ranger has come a long way from its more tame utilitarian days.

The last Ford Ranger available in the U.S., model year 2011, was available as either a regular or SuperCab. Two engines options at that time were either a 4.0-liter V6 or four-cylinder 2.3-liter. A 5-speed manual transmission was also optional. (By the way, it would be a good move to bring back the stick, but don’t count on it. As of model year 2016, Ford stopped offering them in all of its trucks).

What engines are in store for the 2019 Ranger? Seems reasonable to expect that the 2.7-liter and 3.5-liter EcoBoost V6 engines currently available in the F-150 will also be slated for the Ranger. Of course, it would be a great move for Ford to offer a diesel variant.

Ford’s 2018 diesel F-150 will reportedly be powered by a version of the 3.0-liter turbo diesel engine that it’s been manufacturing in England for Jaguar Land Rover vehicles. Makes perfect sense to make that same engine available for Ranger, especially considering that the Chevy Colorado and GMC Canyon are available with a 2.8-liter Duramax diesel.

It wouldn’t be the first an oil burner has made it under the hood of a Ranger. In Europe, consumers can choose from either 2.2- or 3.2-liter diesel engines and opt for a six-speed manual in certain configurations.

Even more exciting is the prospect of a mini-Raptor. Fox News reported recently that Ford registered two trademark names in Australia: Ranger Raptor and Ranger FX4. Models like that in the U.S. will definitely attract attention.

Special thanks to our friends at The Fast Lane Truck for the video. 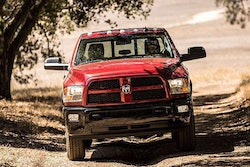 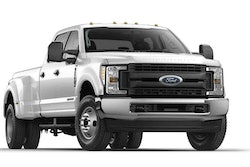 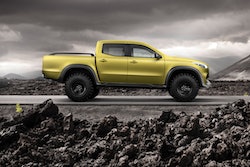 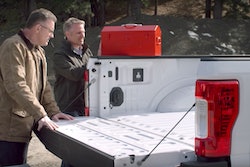