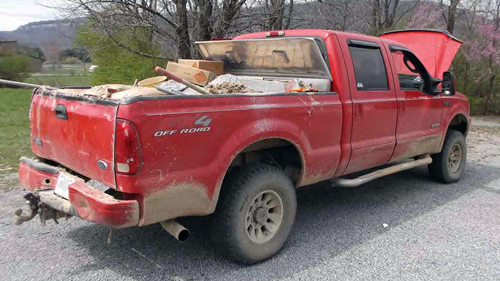 A Crossville, Tennessee-based hotshot carrier has been effectively shut down by the FMCSA for illegally transporting explosives.

A Crossville, Tennessee-based hotshot carrier has been effectively shut down by the Federal Motor Carrier Safety Administration for transporting explosives while in violation of a number of hazardous materials regulations.

On March 28, a pickup truck owned by Rock City Stone Company, doing business as RC Stone & Farms, was pulled in for an unannounced roadside inspection by the Tennessee State Patrol. Police found that the truck was transporting numerous cases of Class 1 explosives, including ammonium nitrate-fuel oil mixture; electric detonators; blasting caps and detonating cord. It is illegal to transport detonators on the same vehicle as explosives unless the detonators are packed in a U.S. DOT-specification container.

According to FMCSA, the explosives were piled in the truck bed next to metal objects, including pipes, buckets and work tools, and inside a bent metal toolbox. The detonators and detonating cord were in the cab of the pickup and improperly packaged in a cardboard box.

Additionally, the company had not prepared hazmat shipping papers, had not placed hazmat placards on the truck and had not prepared emergency response information to be used in the mitigation of a hazmat incident – all of which are violations of hazmat regulations. The truck’s driver also did not possess a CDL, a hazmat endorsement or a medical certificate.

FMCSA says since the beginning of the year, RC Stone & Farms had transported hazardous materials to approximately 44 blasting sites in Tennessee, all without proper placarding. The company also admitted to using a commercially unlicensed and medically unqualified driver.

The shutdown order was served to the company Monday, April 9.