When you need more traction from your pickup, turn to limited-slips and lockers to get the job done

There are times when the road less travelled is that for a reason.

Be it mud, snow,sand, deep ruts, or slick rock, whenever the surface where your truck’s tire are fighting for grip gets bad enough, traction is lost and tires spin.

Well, for a few moments on later-model trucks. Then traction control kicks in, the ABS braking system activates and/or engine power is reduced.

In instances where electronic traction control can’t overcome what the computer perceives isn’t there, you’re stuck.

Electronic traction control is effective in the majority of routine driving situations, especially on ice or snow-packed roads. The sophisticated programming that makes split-second adjustments to control the tires is well beyond the driving capability of most drivers.

Yet despite all their wonderful attributes in day-to-day driving, electronic traction controls have shortcomings in more severe applications such as off-highway use. Traction may be there, but the computer just doesn’t let it happen.

That’s where optional mechanical traction aids such as a limited-slip differential (LSD) or, better still, a locking differential can literally save the day.

For situations such as climbing a steep hill on loose dirt or slogging through deep sand or mud, lockers and limited-slips help send more tractive power to the wheel(s) that have more grip. Lockers more-so than “limited-slips.” Here’s why.

Limited-slip differentials have been around since the ‘50s. They may use internal friction clutches either flat or cone style – or a unique worm-gear arrangement to limit torque to the spinning wheel and transfer power to the wheel with greater traction.

As the name implies, they typically allow driven wheels to spin, just not as much as the stock factory “open” differential.

If serious traction is your goal, most pickup truck owners prefer some type of “locker.” There are two types: automatic and selectable. Some versions, such as the G80 and the electronic-locking diffs, are available as factory options — and the $300-$500 upgrade is worth every dollar.

A  locker, whether automatic, electric- or air-actuated, such as the G80, Eaton E-Locker or ARB Air Locker, operate like an open differential in normal driving conditions and a fully locked axle when traction conditions warrant.

More aggressive lockers, such as the Detroit Locker, are often used by racers and serious off-road enthuisiasts.

All put equal power to both drive wheels when a certain difference of wheel rotation between axles on the same differential occur.

On the other hand, a “limited-slip” is usually biased in how that torque is split. So when one tire is spinning the other tire on that axle with better grip may only get a small portion of power.

The result of most limited-slips is still a spinning tire and no forward momentum when one tire is hanging in the air, or one is on dry pavement and the other in snow.

(One of the best “limited-slip” diffs is the Detroit Truetrac, which is a gear-driven model that works far better than traditional clutch-type limited-slips.)

How do you know if the rear diff in your pickup is a locker or limited-slip?

One method we’ve seen used is to jack one rear wheel a 1/2-inch off the ground with a floor jack. Start the engine. Put the truck in 2WD. Turn traction control off then slowly apply throttle to see if you can drive forward.

If the truck moves forward, it has a locker. If the wheel in the air just spins, and the truck does’t move, it’s a limited-slip or ope differential.

Another method is to do a burnout. If only one rear wheel, usually the passenger’s side, spins it’s a good sign the truck has an open diff or limited-slip.

How an Eaton E-Locker operates 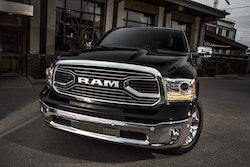 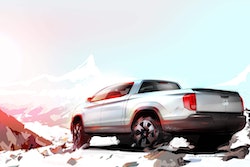 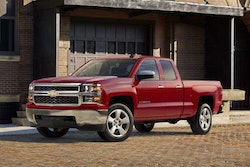 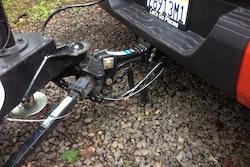