Fuel economy is all about priorities and physics; there’re no magic bullets to make it better– but  there are a lot of ways to make it worse.

Fuel economy weighs heavy on the minds of every contractor who drives a pickup and fleet managers whose performance reviews are based on meeting ever-tightening budgets.

The topic extends well beyond the office or board room. Sit in on any jobsite conversation in the country where pickups and performance are the topic and once the my-truck-will-out-pull-yours bravado settles down the conversation inevitably turns to fuel economy.

Despite many pickup owners’ bragging their trucks get 20mpg-plus on the road and mid-teens in city driving, the reality is stock 4×4 pickups, gas or diesel, are probably seeing city mileage in the low teens and mid- to upper teens on the open road.

If the pickup is upgraded with bigger tires, a lift kit, or loaded down with tools and accessories, you can bet fuel economy is even lower. Slap an equipment trailer on the hitch and fuel mileage drops another 30 to 50 percent.

Lifts and taller tires look good and help increase ground clearance. But the trade-off is a loss in fuel economy.

The harsh truth is simply this: Most of the upgrades we make to our pickups to improve their efficiency and performance in the work place hurt fuel economy.

Make changes that add weight, increase rolling resistance, degrade aerodynamics or cause more throttle to be used to get up to and maintain a certain speed, fuel economy takes a big hit.

For instance, you upgrade to taller, wider tires to get better ground clearance and traction. Those four new tires are heavier than the stock ones, thus they increase rolling mass and rolling resistance.

The taller tires also drop the overall gearing, so now it takes even more throttle to get moving – and to maintain speed.

That’s why pickups regularly lose 2-3mpg in highway fuel economy, and 1-2mpg in city driving going up in tire size.

Add a lift or leveling kit so you can get even taller tires under your truck and the hit to fuel economy is even larger.

Tool boxes, re-fuel tanks, heavy-duty winches and bumpers all add weight. They are necessities for many contractor’s jobs.

That’s because those two changes compound the hit on fuel economy. Not only does the taller, heavier tires affect mileage, the body now sits higher, which creates more wind resistance over and under the truck as you drive down the road.

Add a heavy-duty bumper, big winch, toolbox and refuel tank to your work truck – all must-have tools/accessories for many in our industries – and your truck’s mpg takes yet another hit. Weight, as we all now, takes more fuel to move.

Such upgrades also affect the airflow under and around the body – nine times out of 10 in a negative way. It doesn’t take much in the way of wind resistance to hurt fuel economy on the open road. It’s physics.

Then there’s the biggest mpg killer of all: the driver. Nothing kills fuel economy faster than a heavy right foot.

This is most evident on the highway where wind resistance plays a huge factor in fuel mileage. I’ve seen the difference in a pickup’s fuel economy between driving 55mph and 70mph can be as much as four miles per gallon.

So what upgrades help increase fuel economy? There’re no “magic bullets” that will miraculously improve mileage.

But there are some things that will help keep the numbers under control.

Electronic engine upgrades like tuners and programmers can bring incremental benefits in fuel economy for both gas and diesel pickups.

Changing your driving habits is one. Drive slower and drive smoother; a lighter right foot is a sure way to help minimize those annual fuel bills.

Tuners, chips, and engine programmers may also improve fuel economy – but, again, only if you control that right foot.

The primary goal of such electronic hot-rodding is to add more power under heavy throttle. The claimed fuel economy gains are a by-product of cutting back on fuel during cruise situations when the throttle position is steady and load is light.

When there’s more power on tap, we tend to use it. Those few seconds of heavy throttle kill the mpg numbers you’d worked days to improve.

Other upgrades that might boost annual fuel economy are intake and exhaust kits that help the engine breather easier as well as tonneau covers and bed toppers, which help improve aerodynamics.

Less friction in the drivetrain means the parasitic power loss between engine and drive wheels is less.

But whatever changes you make to improve fuel economy come with a price. And that price has to be weighed against what is gained in fuel savings. (What’s the ROI?)

Fleet managers need to balance between jobsite efficiency and fuel economy when it comes to truck upgrades.

The issue of fuel economy boils down to this:

If your corporate priority is solely minimizing the annual fuel bill, keep your company pickups stock and have everyone drive them like the throttle will explode if pushed too hard.

On the other hand, if your corporate priority is maximizing your pickups’ efficiency and performance on the jobsite with aftermarket upgrades, then accept the fact the trade-off will be a sacrifice in fuel economy.–Pro 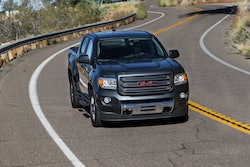