Frito-Lay build a brand on the public’s inability to have “just one.”

This week, the company announced plans to internalize that globally famous slogan, taking it out of the potato chip bag and rolling it out to their fleet’s green initiative.

Senior leadership from PepsiCo’s Frito-Lay North America division were joined Wednesday by representatives from the Department of Energy and the State of Wisconsin to unveil Frito-Lay’s inaugural Compressed Natural Gas (CNG) fueling station in Beloit, Wis.

The station opening is part of Frito-Lay’s large-scale commitment to alternative fuel. The company says it will break ground on seven public CNG fueling stations across the U.S. and continue to grow its CNG fleet, bringing the total number of its CNG tractors to 208.

“This initiative to build much-needed natural gas infrastructure for large commercial vehicles is part of Frito-Lay’s deep commitment to the environment,” said Mike O’Connell, Senior Director for Fleet Operations, Frito-Lay North America. “When all 208 CNG tractors are in service, Frito-Lay will eliminate 7,863 metric tons of carbon emissions, the equivalent of over 1,125 cars annually

The new CNG fueling stations will not only provide fuel for these tractors and help pave the way for more CNG vehicles to be introduced into the Frito-Lay fleet, but will also make available fuel for other companies currently using or considering alternative fuel vehicles in the future. The seven new fueling stations, along with three other stations that will be in operation this year, will begin at a total expected annual volume of two million gallons and grow to a little over eight million gallons in five years.

In 2012, Frito-Lay issued a multi-site competitive Request-For-Proposal (RFP) to potential partners, guaranteeing to purchase a base volume from that vendor’s station once built – giving vendors the support they need to justify building natural gas infrastructure. Questar Fueling and Trillium CNG were selected as the two vendors that will build the seven new CNG fueling stations.

Frito-Lay’s investment in Beloit was also supported by the State of Wisconsin and the Department of Energy.

Frito-Lay, in addition to CNG vehicles, has introduced all-electric trucks to its delivery fleet. In 2012 the company announced it would purchase 100 all-electric commercial vehicles from Smith Electric Vehicles, bringing the total number of its electric fleet to more than 280. These electric trucks eliminate the need for approximately 500,000 gallons of diesel fuel each year. 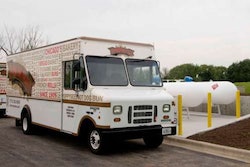 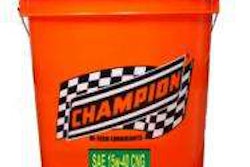 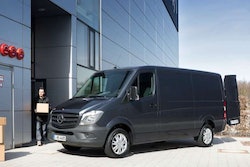 4 cylinder takes over as Sprinter standard