Push a pickup hard enough, even a heavy-duty model, and something’s going to give.

When the rear wheels are spinning and one or both suddenly find traction on more solid footing, there’s a tremendous load placed on the differential.

Sometimes that load has a tendency to break the very components trying their best to provide the best traction. In the popular G80 the weak link seems to be the cross-spider gears.

When mechanic Dave Adair busted the OEM G80 diff locker on his 2007 Chevy 2500 HD, he decided to step up to something beefier, an Eaton Truetrac.

What tipped Adair off there was a serious problem afoot in his truck is under some low-traction conditions the locker would lock and unlock sporadically. Not good.

What he discovered is the factory G80 broke and would only engage in spots where there were still teeth on the gear. (A fact shown clearly by the remains of broken teeth accumulated on the magnetic differential drain plug.)

Thanks to the design of the GM HD differential, the replacement/upgrade process was fairly straightforward.

Adair, fellow mechanic Daniel Parker, and drivetrain repair expert Jack Robertson removed the old locker and replaced it with the new Eaton Detroit Truetrac in about four hours, at Truck Supply and Outfitters in Tuscaloosa, Ala.

The most challenging part of this rebuild, is measuring the backlash on the ring gear. For this you need a machinist’s dial caliper.

Parker borrowed his father-in-law’s setup, a Starrett model with a magnetic base and several adjustable arms which allowed his to position the business end precisely a select tooth on the ring gear.

“The backlash measurement is critical,” say Parker. “If you get it too tight, the gear will not move. Too loose and the differential will whine and suffer excess wear.”

The image gallery below shows the step by step installation process…. 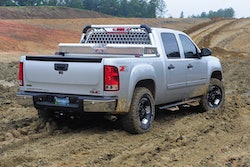 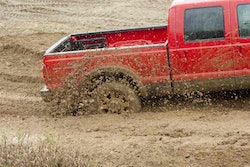