Mack Trucks announced this week at ACT Expo that it was offering a new program and a new safety offering for customers of the Mack LR Electric model.

Mack launched the Electrify My Refuse Route Program, a unique-to-Mack campaign that rewards customers for sharing their refuse routes to prepare the fleet’s readiness for the Mack LR Electric refuse vehicle.

“Mack continues to invest in programs and technology to improve the total cost of ownership for customers,” said Jonathan Randall, Mack Trucks senior vice president of sales and commercial operations. “Helping our customers achieve their sustainability goals, the Electrify My Refuse Route Program mitigates costs associated with electrification infrastructure. Along with sustainability, safety remains a priority for the refuse industry and Mack. PreView improves safety for drivers and others on the road, alerting operators when an object is in a blind spot and helping customers, and the industry, maintain enhanced levels of operating safety.”

Through the Electrify My Refuse Route program, customers download the Mack Route Recorder app to receive up to $750 in Mack parts gift cards for sharing valid refuse collection routes. Customers who then purchase or lease the Mack LR Electric refuse vehicle can receive $25,000 for charging hardware reimbursement and $10,000 in additional charging reimbursements for each further vehicle purchased.

To qualify for parts gift cards and the additional incentives, customers email Mack their recorded collection routes. The customer is rewarded $250 in gift cards for each submitted qualified route, with a limit of three per customer. Those that receive charging hardware reimbursement following a purchase or lease are limited to specific charger models and manufacturers.

PreView is available on the Mack LR Electric, diesel-powered Mack LR and Mack TerraPro models. Utilizing four radar sensors, one on each side of the vehicle, the PreView radar system detects objects and Vulnerable Road Users (VRU) that may be located in a driver’s blind spot. Vulnerable Road Users are pedestrians, cyclists and motorcyclists.

Indicators in the A-Pillars flash lights and audible alerts are sounded when the system detects a metallic object or a VRU in a blind spot. Available as an option and factory-installed on new builds, customers may also retrofit their trucks with PreView by contacting their local Mack dealer.

Easily identifiable by a copper-colored Bulldog on the cab denoting the electric drivetrain, the LR Electric’s vehicle propulsion is offered through four NMC (Nickel Manganese Cobalt Oxide) lithium-ion batteries that are charged though a 150 kW, SAE J1772-compliant charging system. The four batteries also provide all power for every onboard accessory, driven through 12V, 24V and 600V circuits. The two-stage regenerative braking system helps recapture energy from the hundreds of stops the vehicle makes each day with an increasing load.

Mack began serial production of the LR Electric in 2021 at its Lehigh Valley Operations facility in Macungie, Pennsylvania, where all Class 8 Mack vehicles for North America and export are assembled. 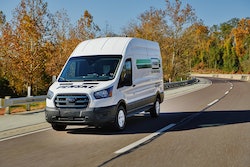 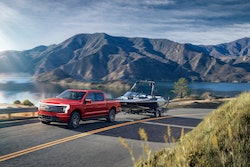 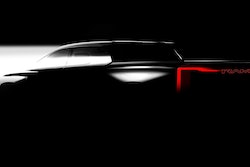