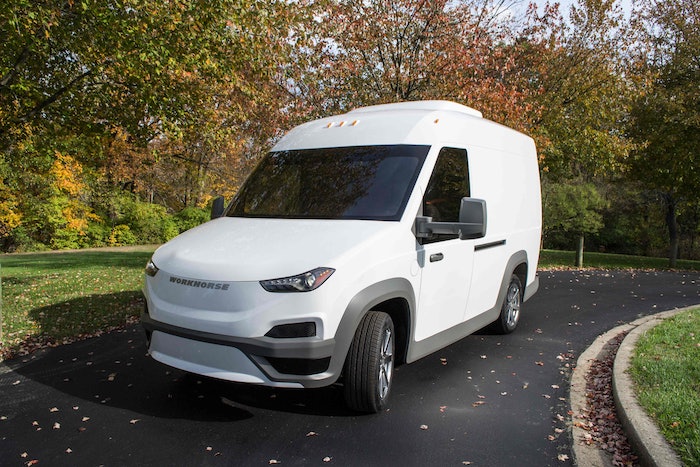 A record quarter for truck builds and a meteoric rise in revenue in 2017 has Workhorse feeling confident about 2018 as it nears production for its new electric cargo van N-Gen.

During a business update conference this week, Workhorse CEO Stephen Burns, announced that the Ohio-based company had built and delivered a record 121 trucks in the last quarter of 2017 and saw a 69 percent surge in total revenue in 2017 over the prior year. UPS has been one of Workhorse’s top customers for its electric powertrains and chassis.

“This is significantly higher than any quarter we’ve ever had. We’re excited about it,” Burns said. “We continue to learn and get better at it every quarter. I think that everybody’s probably aware that the complex and regulatory nature of putting vehicles on American roads is not trivial. There are very few people doing it and very few, if any, smaller companies doing it. We’re excited about it and we continue to learn and continue to get better at it every quarter.

“We expect this trend to continue year over year both in revenue and in margin,” Burns continued. “The current backlog already for 2018 is about $9 million with another $3 million to close this month, so we’re already off to a pace that exceeded the entire year last year. That’s on the revenue side.”

“It all kind of dove tails into better margins,” Burns said. “Traditionally these trucks are very heavy and we’ve been able to really add modern techniques, like carbon fiber for example, to lighten them up. So that’s how we’ve done it—with engineering and volume.”

Though Workhorse revealed its W-15 hybrid electric pickup about six months before its N-Gen electric cargo van, it’s the van that will get first dibs on production.

The N-Gen is an easier build with fewer regulatory hurdles, Burns explained, so production will begin first on it, while the W-15 is set to hit the assembly line in 2019. However, some fleets will receive pre-production versions of the W-15 this year. Fleet pre-orders for the W-15 are valued at $300 million.

“This is, of course, our most exciting product because it has the most potential for sales,” Burns said of the W-15. “I think that most people are aware—in America at least—that pickup trucks are the number one vehicle category. We are coming to market with the first electric, range extended pickup truck. This market place is almost three million vehicles a year.”

Burns said he anticipates that Workhorse will sell roughly 2,000 vehicles in 2018, with the N-Gen generating most of those sales. Sales for 2019 are projected at 10,000 vehicles.

Equipped with a lightweight, composite body, N-Gen has an anticipated range of 100 miles on a single charge. An optional gasoline range extender adds an additional 75 miles. N-Gen will be priced the same as the W-15, which will start at $52,500.

“This market is at least ten-fold that of the step van market. We believe this to be the delivery van of the future. But it can also be used by telecoms and cable companies—all the folks that use these types of vans. An electric van of this nature—the duty cycle that most folks use these cargo vans for really fits well with electrification,” Burns said.

The total cost of ownership for the van over a five to eight year period is less expensive, Burns said, than a conventional van.

“That’s a significant milestone. We don’t know that that’s happened before,” Burns explained. “Gasoline was always the low-cost leader, but when you look at total cost of ownership, our van wins.”

Workhorse is one of five finalists competing for the coveted contract with the U.S. Post Office to supply its next delivery vehicle.

“The post office doesn’t want any of finalists to really speak too much about it publicly, but the vehicles are in test and we are excited about the progress our vehicles are making during the testing,” Burns said.