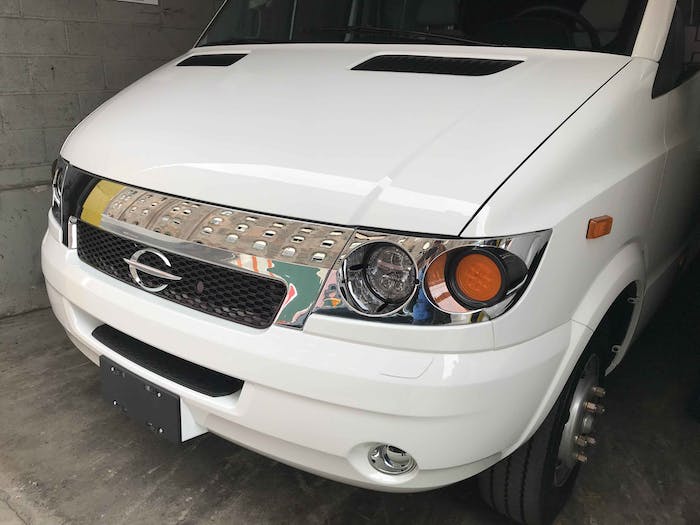 A fully-electric powertrain is all-the-buzz in commercial transportation these days, but the problem is that it’s somewhat of a unicorn on the road.

Electric vehicle startup Chanje on Thursday changed all that, offering me a test drive of its V8070 around Brooklyn, N.Y.

The company’s flagship auto is the first electric medium-duty panel van designed and built from scratch and is targeted for the final-mile delivery industry. Historically, if you wanted to go electric in the last-mile space, you needed a retrofit.

Chanje’s V8070 cargo van takes the aftermarket out of the equation as Chanje CEO Bryan Hansel hopes to capitalize on a waning global appetite for fossil fuels. 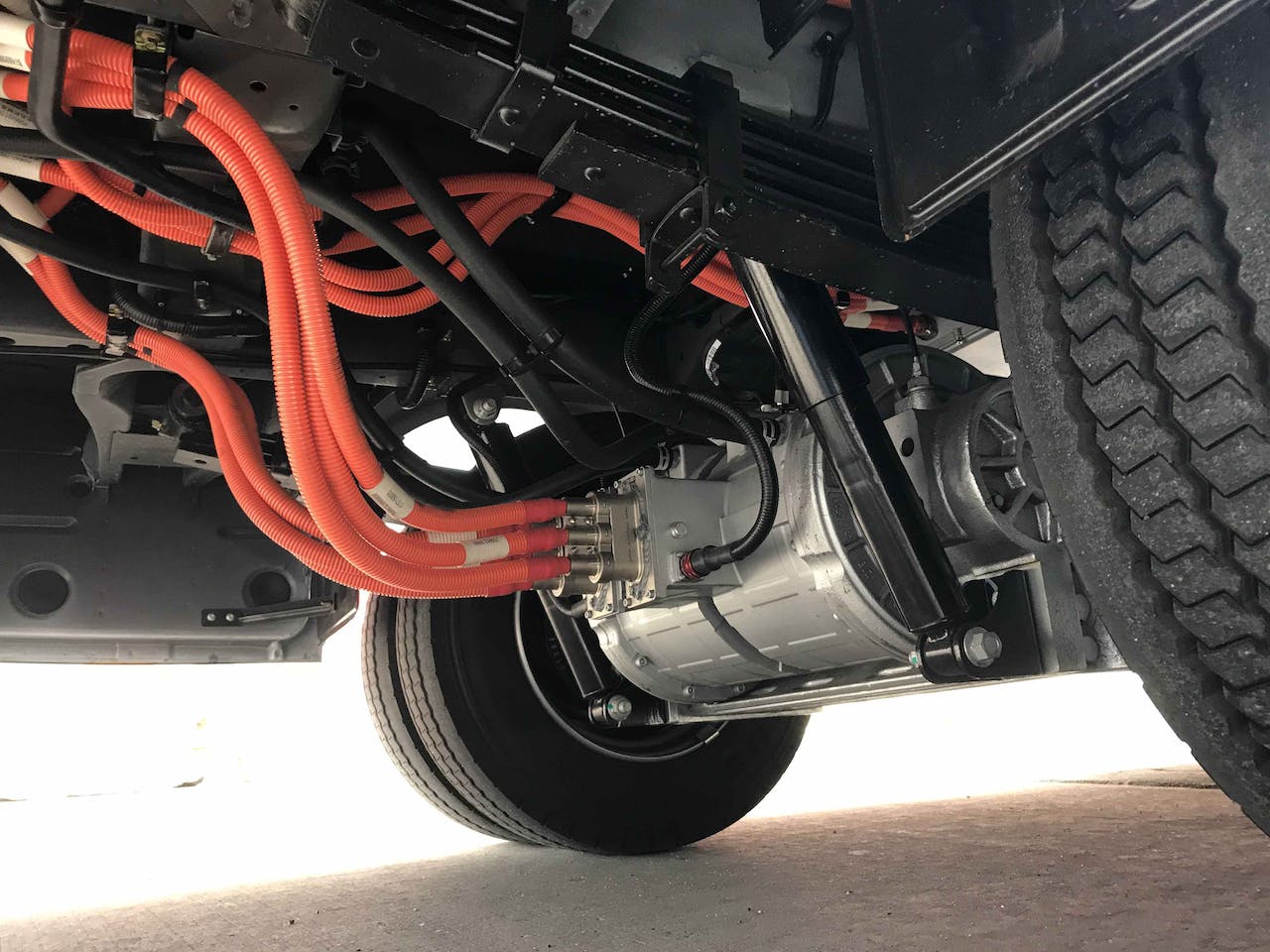 Hansel says the company’s electric motors have significantly fewer moving parts than fuel-fired engines, resulting in a maintenance cost that is reduced by upwards of 70 percent. For maintenance, Chanje will leverage Ryder’s 800 location strong footprint. The two companies are already working to train some of Ryder’s 6,000 technicians on how to service the dual electric motor van. The first crop of Chanje-certified Ryder techs graduated last week.

The van’s push-button start was an interesting feature more fitting of a luxury car than a commercial van, but it works and it’s cool. With no engine to turn over, a key-start isn’t really necessary. When you push the button, it’s a lot like turning on a computer. It takes about five seconds for the van to boot-up and offer the driver a display of all the van’s vital signs.

I pressed one more button to disengage the van’s electric parking brake and I was on my way. A cobra-head shifter is mounted just to the right of the driver on the dash, and shifting between park, reverse and drive is a pretty normal process. Even in the absence of an engine, the van still creeps forward at an idle pace when you lift your foot off the brake, a feature that also helps prevent the van from rolling backward from a stop.

Without a running engine, the 16,535 lbs. GVW van is noise-free – a feature I’m sure the crowded streets of Brooklyn could appreciate and as I whizzed around the crowded blocks, sharing the road with numerous loud transit busses and refuse trucks. 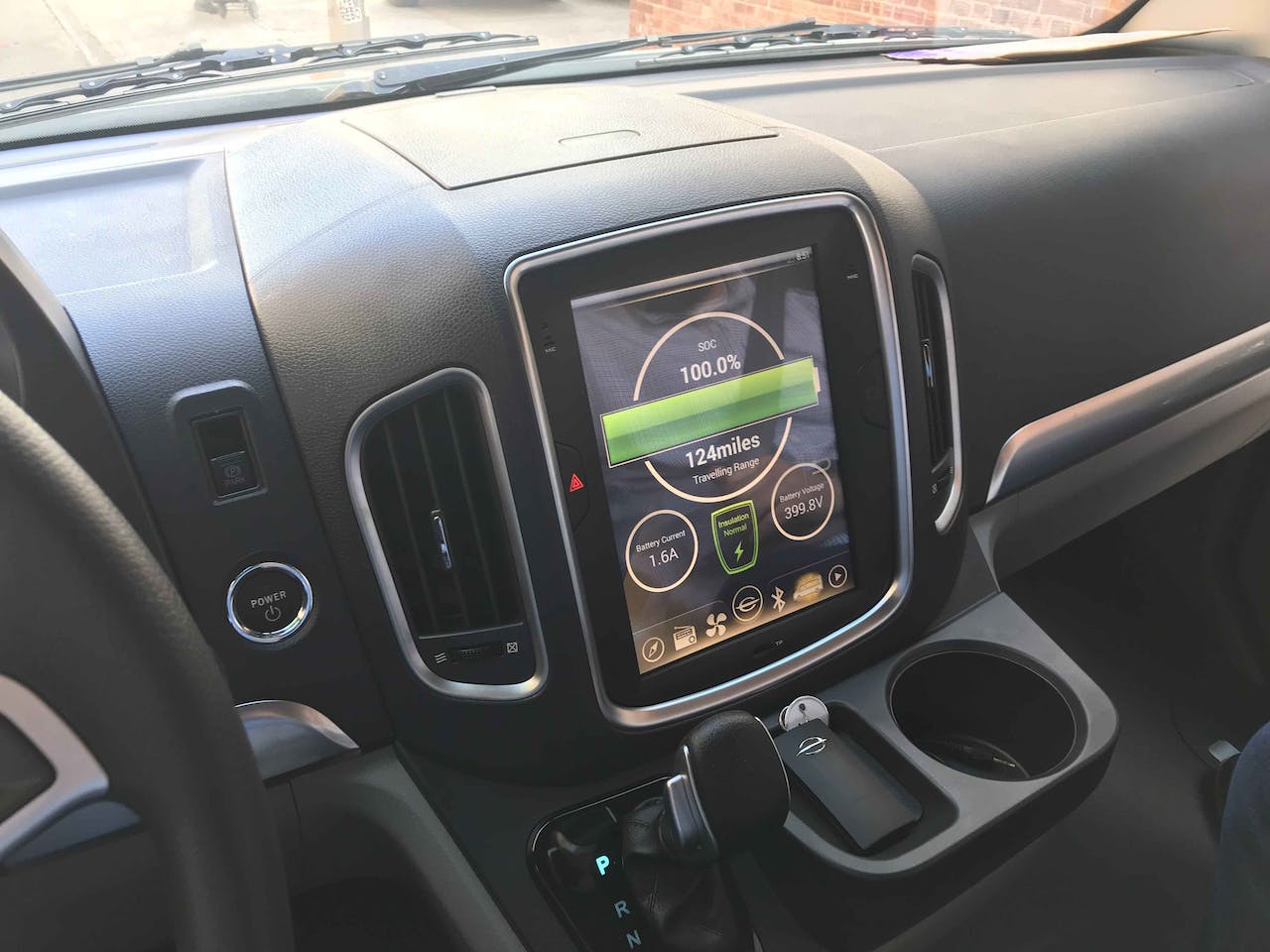 A 10.4-inch, Android-based touchscreen display with LTE connectivity controls most of the van’s features, like lighting and temperature control.

The V8070 offers a 30 percent gradability, meaning the van can launch from a dead stop up extraordinarily steep hills. Hansel says during on-road testing in San Francisco, the company was unable to find a hill the van couldn’t scale. That’s pretty impressive. I’ve been to San Fran several times and have found many that I can barely walk. Grades tend to be a weakness of electric vehicles, which are high on torque but often don’t offer the gear ratios needed for both steep climbing and highway speeds. To get one, you usually have to sacrifice the other but the V8070 has both. Chanje’s van is capable of speeds up to 80 miles per hour, giving the van plenty of power at the top and bottom end.

My first right-hand turn took us to the foot of a steep grade. I plowed my foot into the accelerator, the torque from the dual rear wheels bit the asphalt and we crested the hill easily.

The liquid-cooled dual motor system makes the equivalent of about 198 hp and 564 lb.-ft. of torque, and gives an estimated 50 MPG equivalent.

With a payload capacity of 6,000 lbs., the V8070 offers about 1,350 pounds more hauling capability than a Ford Transit, the best-selling commercial van in the U.S. Its 580 cubic feet of cargo space is 38 cubic feet more than a high-roof, long-wheelbase Transit, but the Class 5 electric weighs over a ton more than the largest Transit model.

Most of the added weight comes from the battery supply, which is mounted between the frame rails. This gives the van a noticeably lower center of gravity, removing most of the top-heavy feel associated with large cargo vans.

The average route for a medium-duty commercial truck is about 65 miles, well within the Chanje 70 kWh battery’s 100 mile range. You can squeeze out a few more miles through the van’s regenerative braking, which cycles energy from the brakes back to the batteries after it dips below a 95 percent charge. 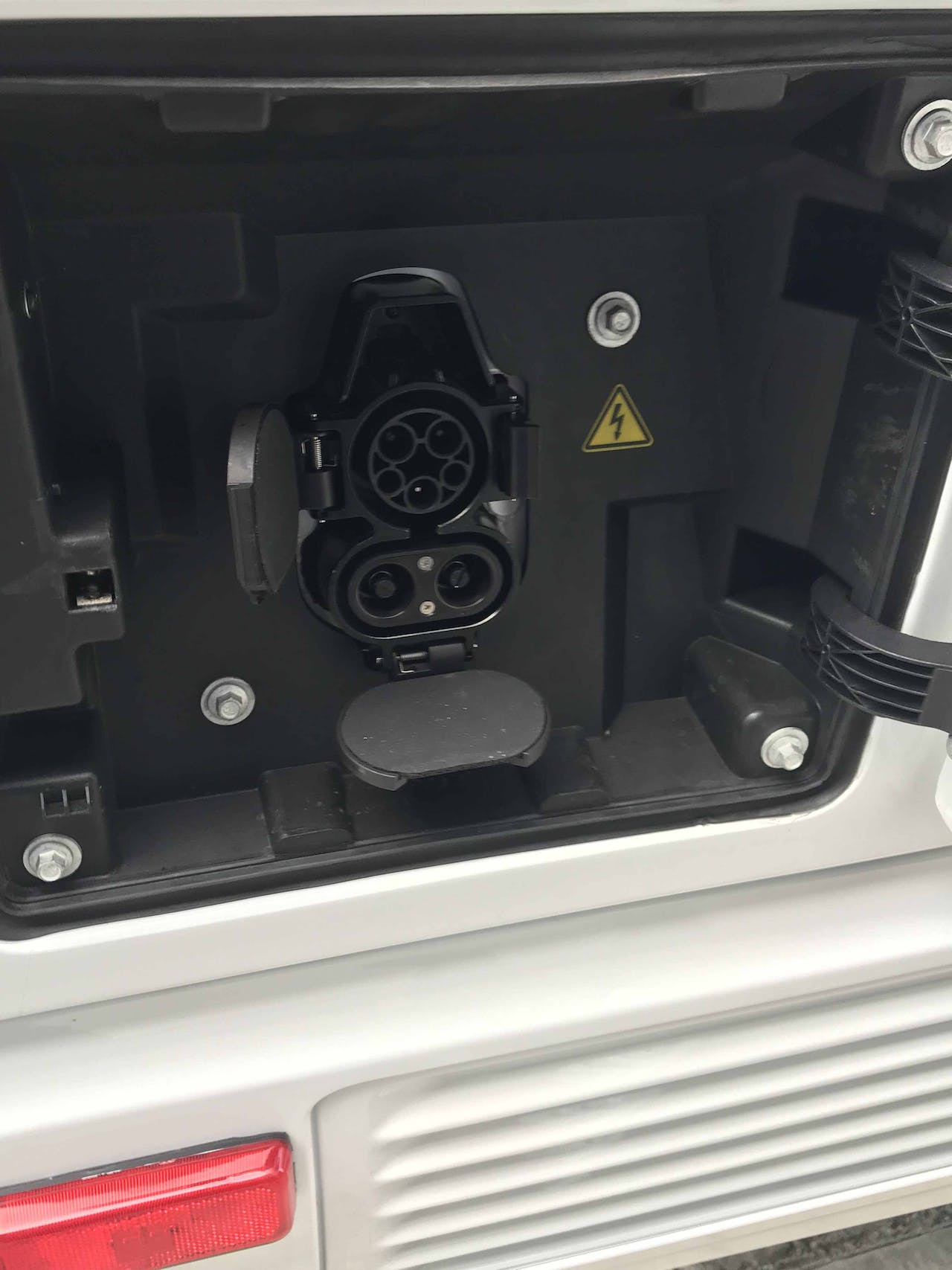 Maximum range is calculated on a payload of 3,000 lbs., a number Hansel says is based on a diminishing load – with the van starting its route close to the maximum load but ending the day empty.

“We’re laser-focused on last-mile,” he says. “Most people aren’t going to push the payload. In package delivery, [6,000 pounds] is a lot of weight.”

The V8070 features a 7.2 kW onboard charger and standard SAE J1772 connector complement typical commercial van duty cycles. There’s no need to interrupt a route to find a fuel station. Just plug the V8070 in at any equipped depot – either at the fleet itself or an equipped Ryder shop – for an overnight charge.

The passenger car inspired cab is home to a 10.4-inch, Android-based touchscreen display with LTE connectivity that controls most of the van’s features, like lighting and temperature control. It also offers weather updates and shows how much charge is left in the battery. The V8070 features power windows, power locks and smartphone-to-media system connectivity.

The steering on the unibody, rear-wheel drive V8070 is tight, maneuvering crowded urban roads much better than its 194.3-inch wheelbase – and overall length of 318.1-inches – would suggest.

A turning radius of 26.6 feet is staggering considering the V8070 is about 28.3 inches longer than a long-wheel base Mercedes Sprinter, but it turns curb-to-curb in half the distance thanks to a deeper wheel cut.

Production of the vans will kickoff in China, where Chanje has a capability of up to 100,000 vehicles per year. Final assembly will be done in the U.S., and Hansel says he expects to open several assembly locations with a capability of 10,000 to 20,000 units annually at any given location. The first such location will be at a yet-to-be-determined facility in the western U.S.

Ryder, who is also Chanje’s exclusive sales provider, announced Thursday will take delivery of 125 of the medium-duty electric panel vans for its ChoiceLease and rental customers in San Francisco, Los Angeles, San Diego, Sacramento, and San Jose, Calif., as well as in Chicago and New York by the end of the year.

Hansel says the company hasn’t yet pinned down a sticker price for the van, but he does expect the upfront cost to be a premium over similar gas a diesel models. However, over the lifecycle of the van, he expects reduced fuel and maintenance costs to negate any price differential. 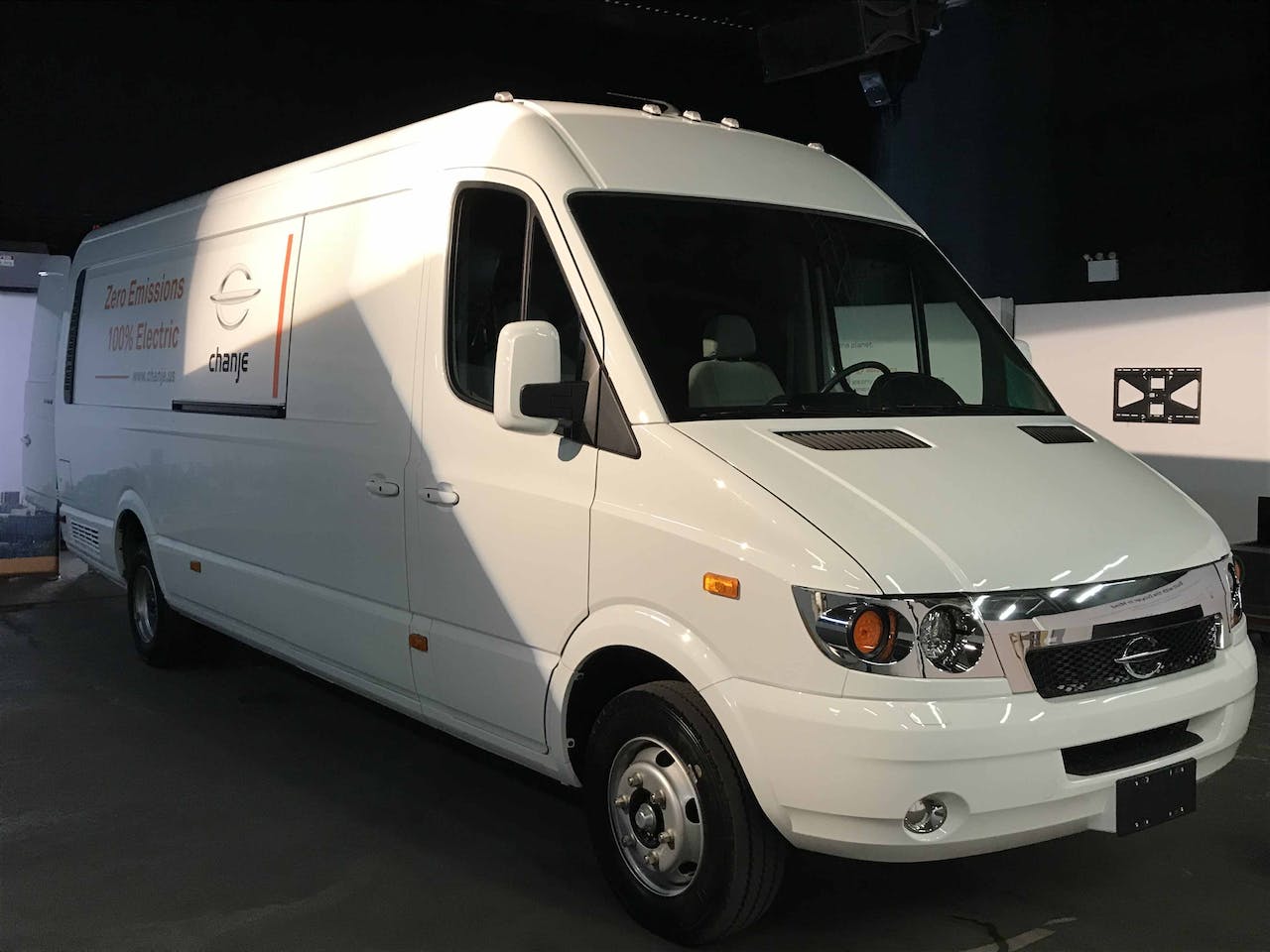 Next year Hansel says he expects to offer a shorter wheelbase and cab chassis, each built off the V8070 platform that Hansel expects to eventually take global.

“If we launch [in the U.S.] and can prove viability of the product, that’s going to open up the rest oft he world,” he says.

As advanced as much of Chanje’s technology is, the function is really quite traditional. Unless you’re listening closely to the reduced noise level, or you’re tuned into your reduced carbon footprint, the Chanje panel van works and feels like a panel van. It does the job, just in a unique way.

The adoption of technology is tough to predict, but the the Chanje V8070 makes a strong business case for itself among short-haul, return-to-base operations that may need a little more cargo space. Ryder’s vast network should alleviate any service concerns. The shift to electric mobility is underway and the first seat at the commercial transportation table has been filled. 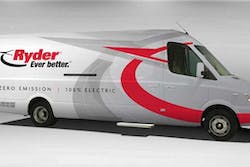 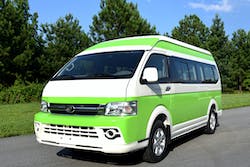 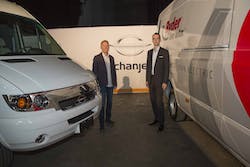 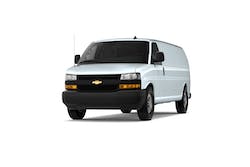