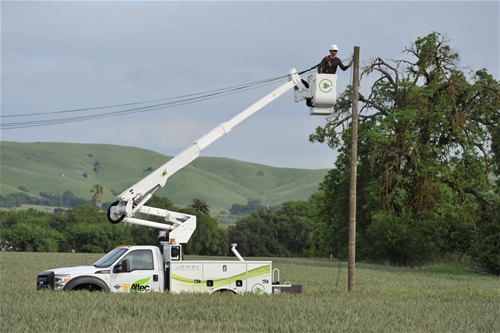 A utility company in Des Moines, Iowa has added more hybrid service trucks to its fleet which will reduce emissions and noise.

MidAmerican Energy acquired its first Altec AT40G JEMS (Jobsite Energy Management Systems) in November. Now, the company has added seven more to its fleet, each of which will save up to eight gallons of fuel per day by relying on batteries, instead of the truck’s engine, to power lights and a hydraulic boom.

“Every hour a truck idles, it uses one to two gallons of fuel,” says Brian Knights, MidAmerican fleet manager. “According to industry figures, on average, service trucks idle about four hours per day on the jobsite.

“So by eliminating those four hours of idling every day, we will save four to eight gallons of gas per vehicle per day, which will add up to a significant reduction in emissions and significant fuel cost savings over the course of the year.”

Following a full day at work, the green fleet trucks have to be charged for eight hours. The trucks, built on an F-550 chassis and equipped with a diesel engine, are equipped with a second alternator that provides partial charging as the vehicles are driven between jobs.

Five of the hybrid trucks will be used in the Des Moines area and the remaining three will be based in the Quad Cities, a region comprised of four counties in southeastern Iowa and northwest Illinois. Knights says MidAmerican will be adding to its green fleet over the next few years as service vehicles are replaced.

“Environmental respect is a core principle of MidAmerican Energy, and we’re always looking for ways to operate more efficiently and reduce our environmental impact,” Knight says.

MidAmerican, a subsidiary of Berkshire-Hathaway Energy, is the largest utility provider in Iowa. It services nearly 1.5 million electric and natural gas customers in Iowa, Illinois, South Dakota and Nebraska.