Fun with trucks, Euro-style: Do not take this flying leap yourself

(Screen captures: EMC Corp.; captions are totally made up by the Fun Trucks Friday staff and are intended for entertainment purposes only)

Be advised: If you can find something beneficial to your hard-working truck operation from this video, do tell. Otherwise, don’t try to break this world record – 83’7” for a tractor-trailer leap – without adult supervision. And without engineers, and insurance.

“It’s the one thing I have not done in a big rig,” he says. “I’ve crashed them every which way you can. The one thing I haven’t done is jump a truck and trailer, and I’ve never seen it done before. I think it’s a true, legitimate first.”

Oh, and a Lotus F1 car will pass beneath the airborne rig.

Ryan explains that the team gutted the interior of the tractor “to remove anything that’s flammable.” And there’s a roll cage, sliders, etc., to be added, based on Ryan’s lifetime of experience “thinking I know how these things work.”

And we have the details of the jump: calculating the vehicle weight, speed, ramp angle, etc. – and building an infrastructure to support the math.

“I think it’s extremely critical to hit the ramp as straight as possible,” Ryan says.

Unless you’ve ever blasted a big rig up a narrow jump ramp (think along the lines of hitting an oil change rack at high speed) , we suggest you not question Ryan’s emphasizing the obvious. File it under: Easier said than done.

Of course, Ryan is best known for his assaults on Pikes Peak for Freightliner, but here he’s wheeling a Renault, which is owned by the Volvo Group.

But the hero isn’t Ryan and the truck: It’s the race car driver who thought, sure, I can slip under a flying semi.

And Ryan admits as much, not that his own gig is routine.

“I’m pretty excited; it’s adrenaline, of course,” he says. “Really, I’m worried about everybody else.”

Stunt driver Martin Ivanov, at the wheel of the F1 car, concedes “it was scary,” and otherwise “joy and happiness” when he hit the mud and spun after crossing under the rig –  joy that he wasn’t made a mud pie, we presume.

Whether Ivanov’s brief post-jump comments in the video were limited because of his English or because he urgently needed to change his drawers, we can’t be sure. 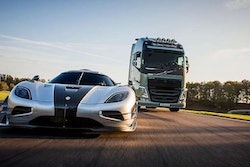 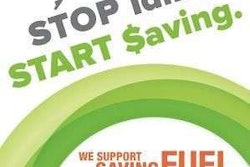 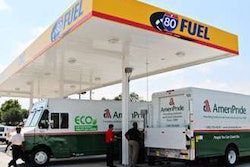 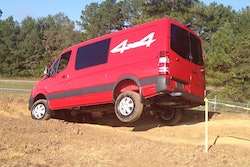