Zero-emission pizza from the back of a pickup?

Even the most seasoned tailgater may drop his greasy spatula at the sight of Toyota’s 2018 Tundra PIE Pro which was revealed today at SEMA in Las Vegas.

Forget everything you know about food trucks and think way outside the box, or in it, in this case.

The bed of the hydrogen-powered Tundra PIE Pro has been converted to house a robotic kitchen which can churn out a pizza every seven minutes.

You may not be one of those like me who’s still impressed with what their toaster can do with Pop Tarts and frozen Lego waffles. Nonetheless, this is an impressive inroad to culinary wizardry. Okay, so it’s one less truck bed that can haul plywood. Who cares? It can make pizza. There are plenty of other pickups out there that can still haul wood, chainsaws and my boys’ weight bench.

Put it in four-wheel drive and take to hurricane-ravaged Panama City, Fla. where my friends, family and neighbors would line up to buy, gawk and record the excitement.

But we can’t get too excited. It’s a prototype built by Toyota’s Motorsports Technical Center (MTCI). The overall project included cooperation from its Plano, Texas, neighbor Pizza Hut, along with engineering from Nachi Robotic Systems.

The starting point was a Tundra SR5 that was torn down to a bare rolling chassis and then reassembled from the ground up. The conventional gasoline-powered drivetrain was removed and replaced with a hydrogen fuel-cell electric power unit adapted from the Toyota Mirai.

Totally self-contained, The Kitchen, as it’s called, comprises a refrigerator, a pair of computer-guided articulating robotic arms, and a portable, high-efficiency conveyor oven. Like the truck itself, all Kitchen components can be powered by hydrogen fuel cell electric powertrain.

From start to finish, the pizza-making process takes between six and seven minutes. When the process begins, the first robotic arm opens the refrigerator and removes the selected pizza, places it on the oven conveyor, and returns to close the refrigerator door.

The pizza is then conveyed through a high-speed ventless oven. On the far side, a second robotic arm removes the finished pie, places it on the cutting board, divides it into six identical slices, boxes it up, and delivers it to the customer awaiting on the side of the Tundra.

“We’ve had a hand in putting together all sorts of custom Toyota vehicles over the years, from high-performance racecars to one-of-a-kind show vehicles,” said MTCI’s Marty Schwerter, “but the concept and technology used in this Tundra presented a unique challenge.”

Yes Marty and now you’ve got a pizza-making pickup. Thanks for seeing it through. This is great. Next, would you please strike up a deal with Krispy Kreme? 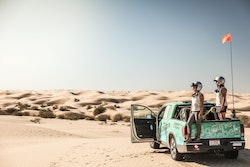 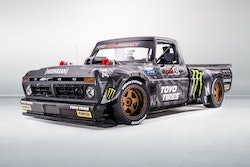 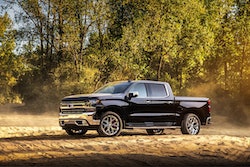 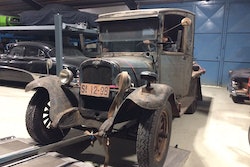