President Donald Trump may have gotten a monkey off his back—that is so long as United Auto Workers are willing to play ball.

During a campaign rally Wednesday in Panama City Beach, Fla. the president told a crowd of thousands that General Motors would be selling its shuttered Lordstown, Ohio plant to Workhorse for electric truck production.

It was great news for the president who said despite new business growth in Florida, Michigan, Ohio, South Carolina and North Carolina, he was still being pressured over the closed Lordstown plant.

“They could never hit me with anything because we’ve been so good,” Trump said. “But they said, ‘What about Lordstown? What about Lordstown?’ I call up (GM CEO) Mary Barra, ‘Would you make a deal? Or open it please? I’m getting killed with that plant.’ Anyway, today she called. They’re going to be opening. It’s going to be a great company going there. It’s really wonderful.”

However, Trump cautioned that the deal requires the blessing of United Auto Workers.

As of Wednesday, according to The New York Times, the union wants GM to continue operating the plant which had produced the Chevy Cruze sedan until sagging sales brought on by increasing demand for pickups, SUVs and crossovers led to its closure.

“Clearly this deal for the GM factory is still in the early phases,” Workhorse vice-president of vehicle programs, John LaFleur, told Hard Working Trucks today. “We’re definitely focused, excited and I think the world’s ready and obviously our current administration is excited about it.”

In 2017, Workhorse revealed its hybrid W-15 pickup at the Advanced Clean Transportation Expo in Long Beach, Calif. Hard Working Trucks and other media outlets had a chance to drive the ½-ton truck which runs initially on batteries and then switches to a range-extending BMW I3 engine once the all-electric range has been depleted.

LaFleur said the Cincinnati-based company will now focus more so on producing an all-electric pickup which it announced last August.

“We’re hoping that’s our initial push but that still has to be ironed out as well,” he said.

Ohio is seeing a resurgence in auto-related jobs, Trump said.

“Everyone’s coming back in. Toyota’s coming in. Honda’s coming in. Many, many car companies. General Motors just announced three big plants, 450 workers, $700 million. But the big announcement is in Lordstown, Ohio,” the president said. 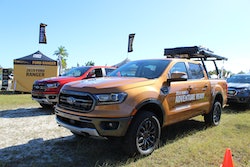 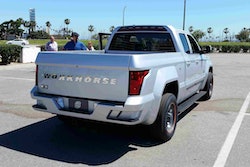 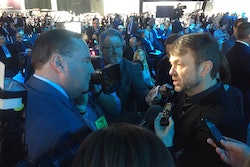