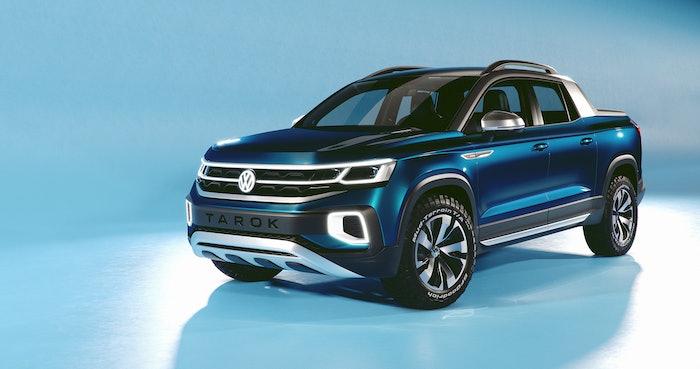 Volkswagen of America plans to show the Tarok pickup concept for the first time in the U.S. at the New York International Auto Show.

The compact unibody pickup was first seen at the Sao Paolo International Motor Show at the end of 2018 and is expected to enter production for the South American market in the near future.

Although there are no plans to produce the vehicle for the U.S. market, the Tarok concept is being shown to gauge market reaction for a truly versatile and compact entry-level pickup.

The Tarok Concept is powered by a 1.4-liter, 147-horsepower four-cylinder turbocharged and direct-injection TSI engine, mated to a 6-speed automatic transmission and permanent 4Motion all-wheel drive. 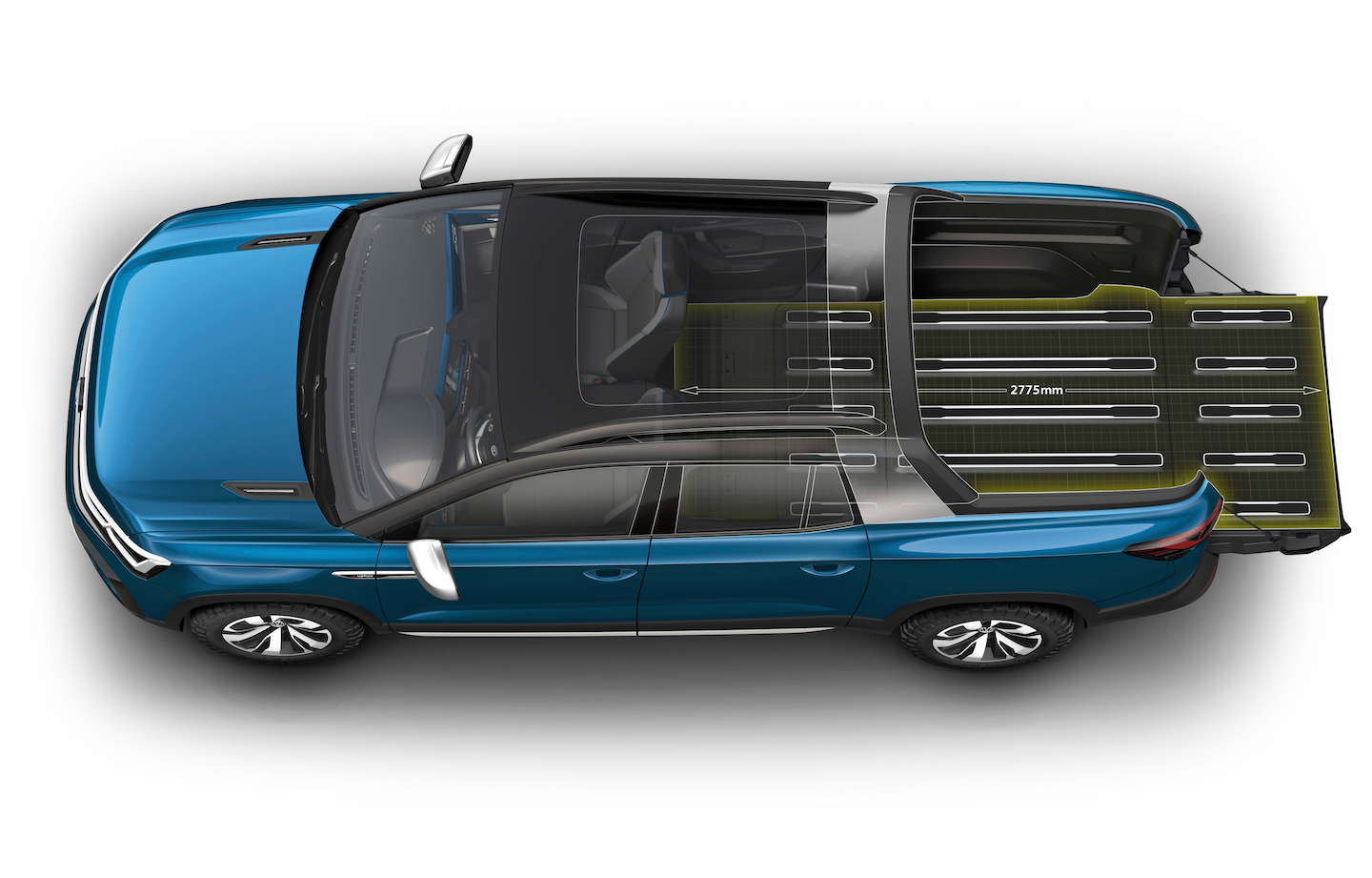 Based on the MQB platform, the Tarok concept is a compact pickup that is 193.5 inches long, yet has the ability to carry loads up to 73.2 inches long thanks to an innovative design that allows the pickup bed to extend into the cab.

According to VW, the key to the Tarok concept’s versatility is a variable load area. The floor space can be enlarged not only by opening the tailgate, but also using a newly developed mechanism for folding down the bottom of the passenger cabin’s rear panel.

The rear seats can be unlocked and folded. The rear panel is then locked from the inside via an electrical system. A sealing mechanism helps ensure that the interior is optimally protected against moisture.

The Tarok concept design shows a close relationship with other Volkswagen SUVs, such as the Atlas and the new T-Cross.  It has a tall hood, horizontal bars in the grille that run into the headlights, and LED headlights and Daytime Running Lights. Tarok also gets an underbody skid plate and a roof and A-pillars finished in gloss black. 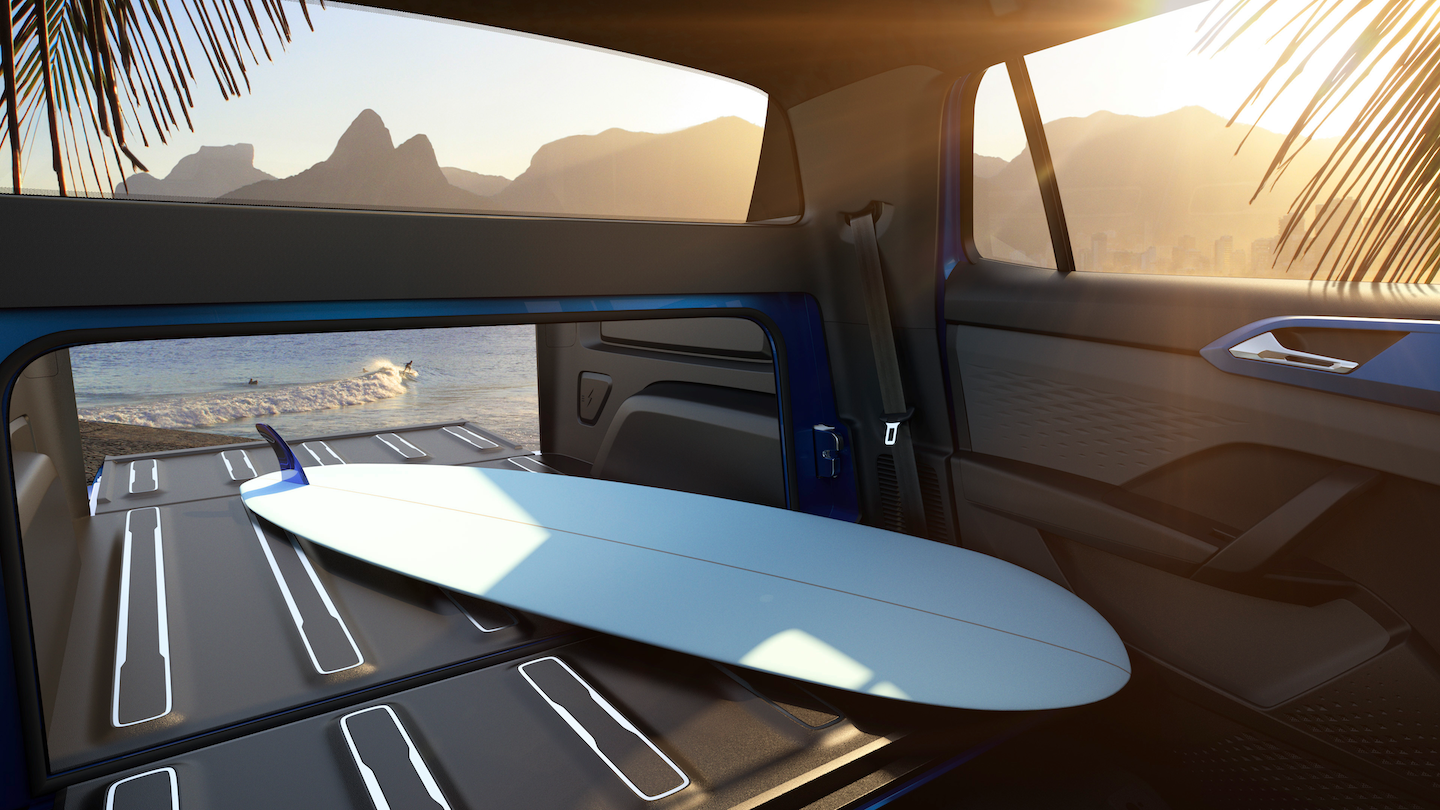 From the side, the most striking feature is the C-pillar that looks like the bar on a Targa top.  The aluminum frame extends from one side of the vehicle to the other, covering the Tarok concept’s rear panel. The other main features are a tornado line designed as a sharp undercut above the door handles and a shoulder section that emerges above it. The 16-inch aluminum-alloy wheels are fitted with 235/70 tires.

A continuous LED strip dominates the rear of the Tarok Concept. This wide light strip is located on the top section of the tailgate and then merges outwards into both rear lights, helping to create an unmistakable light signature at night. The tailgate itself extends right into the bumper, giving a low load height.

The interior features a fully digital design for the instruments and air conditioning control system. A glass-covered 9.2-inch Infotainment system and a configurable Volkswagen Digital Cockpit are the central elements within the color-keyed instrument panel. These two elements create a continuous digital and networked cockpit, designed to help make use of a maximum range of online services and apps. Another clever feature is a speaker in the center console that can be removed and connected to a compatible smartphone via Bluetooth.

Located behind the shift lever is the 4Motion® Active Control—a multi-functional rotary knob that is used to control the all-wheel-drive functions and associated driving modes. The driver uses it to activate four higher-level modes and different pop-up menus. If drivers turn the switch to the left, they access two “Onroad” and “Snow” profiles. If the switch is turned to the right, “Offroad” (automatic setting of offroad parameters) and “Custom Offroad” (variable settings) are activated.

The 4MOTION Active Control can be used to adapt all relevant assist systems to the drive situation in seconds. The “Comfort”, “Normal”, “Sport”, “Eco” and “Individual” driving profiles, also selected via 4Motion Active Control, are also integrated. These profiles are used to customize parameters such as the throttle response, gearshift, climate control and steering.

The Tarok has an approach angle of 23.8 degrees, a departure angle of 26.4 degrees, and a breakover angle of 22.1 degrees. The minimum ground clearance is 9.6 inches. 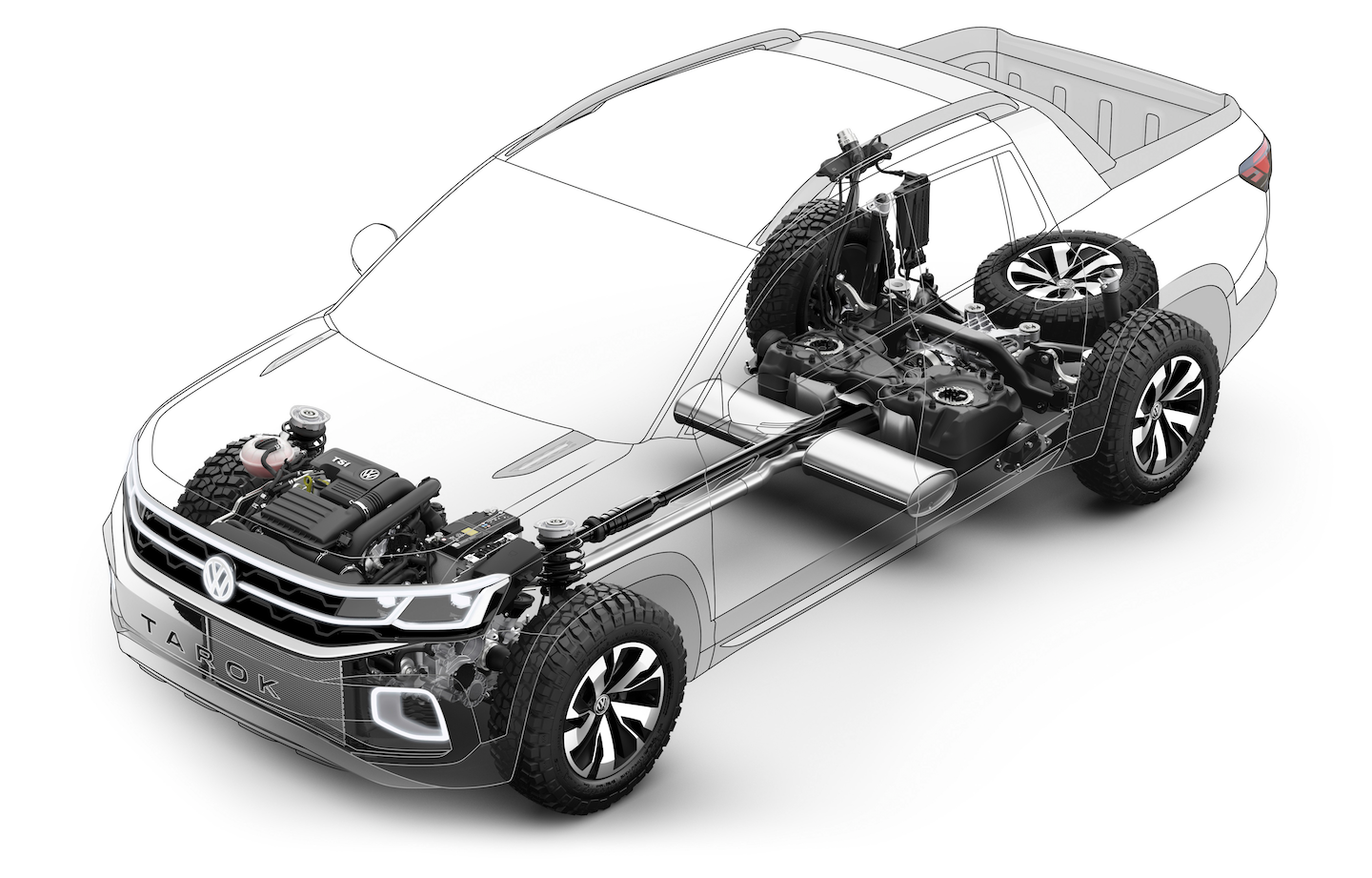 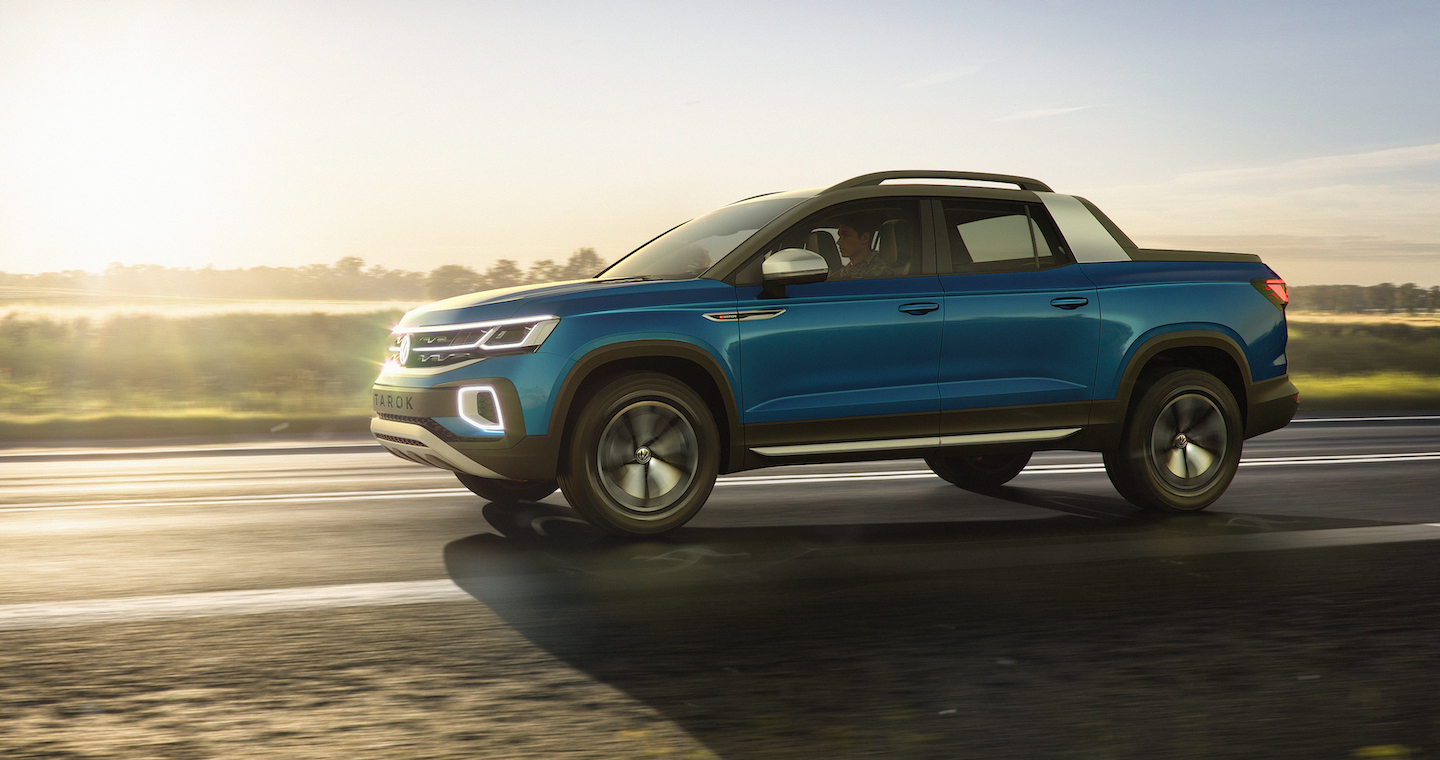 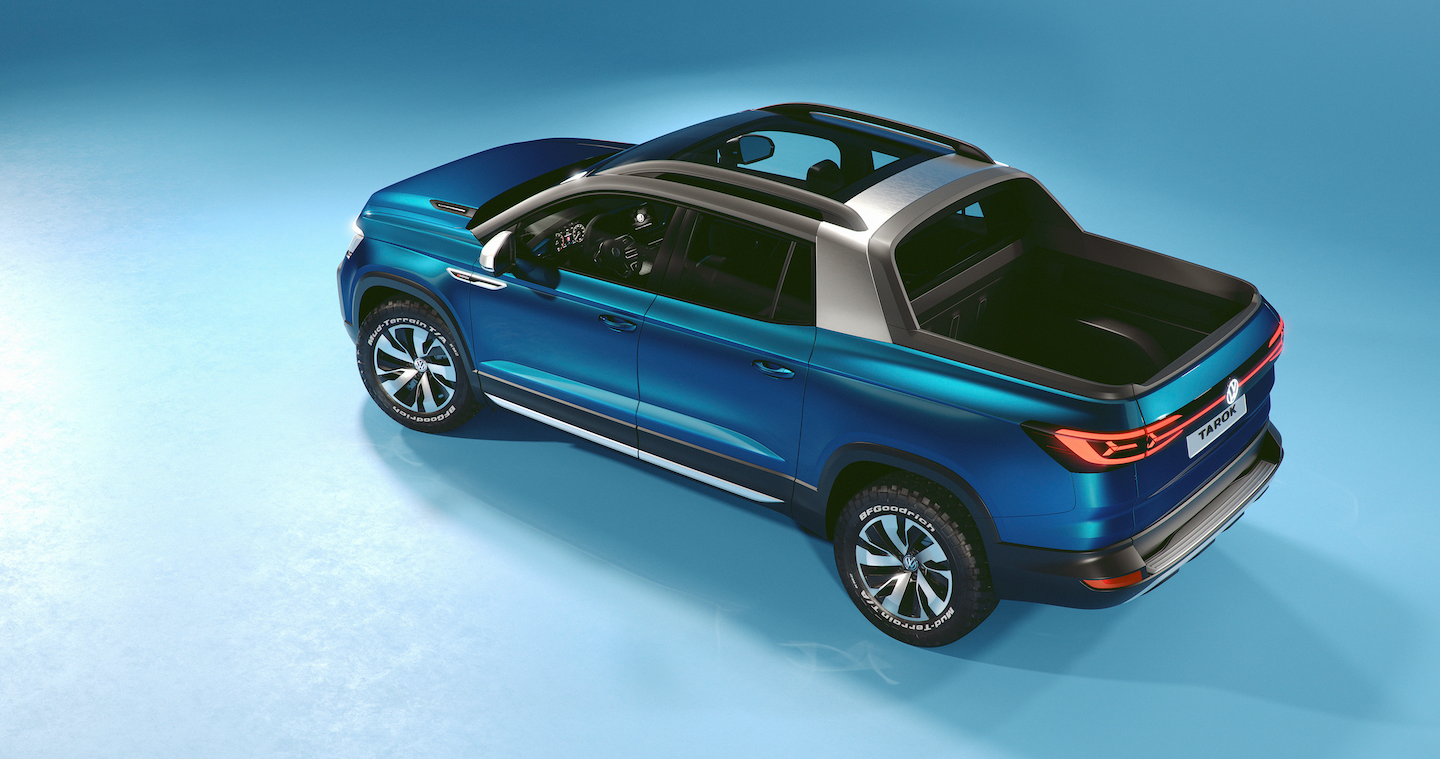 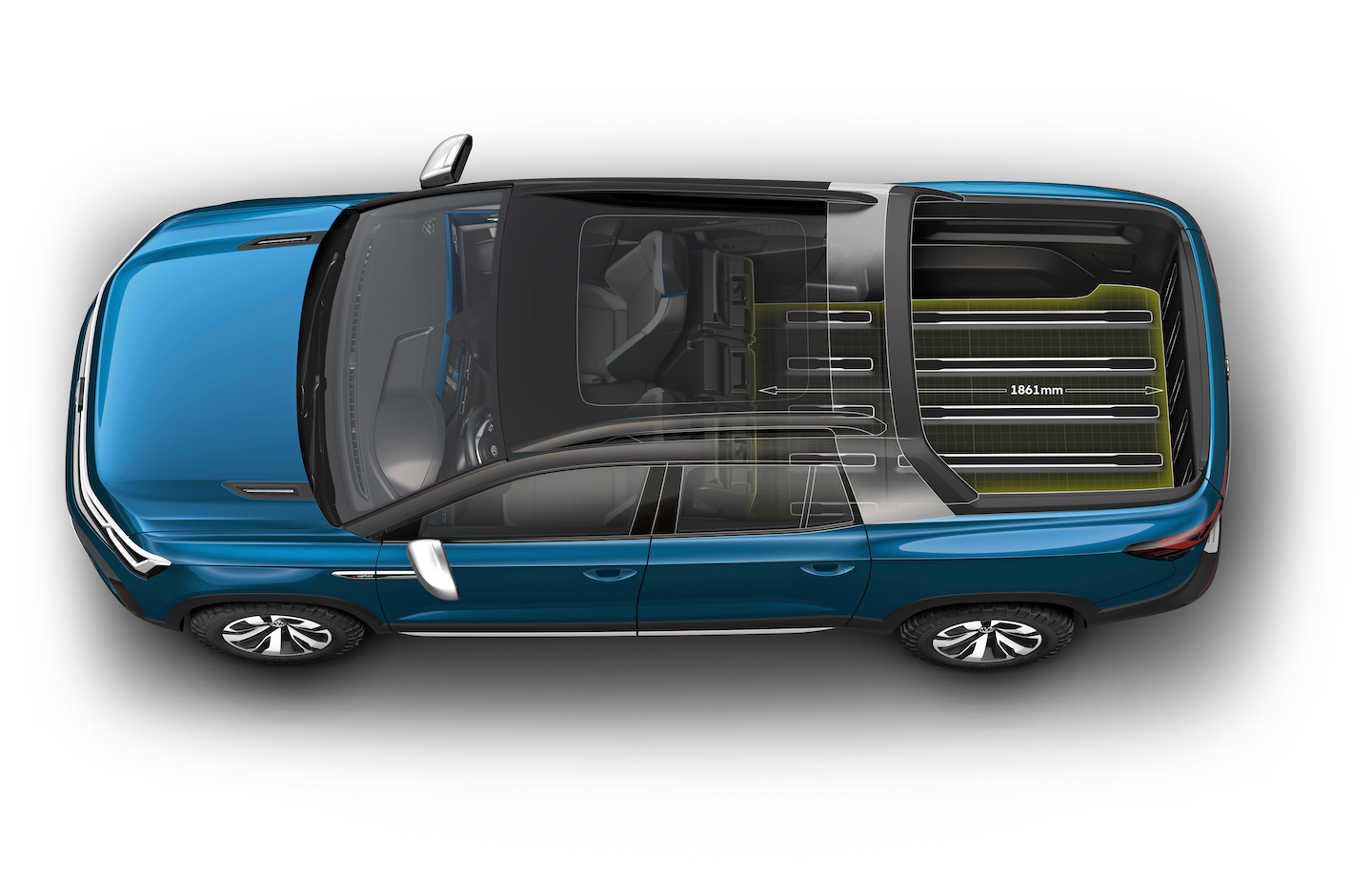