A thousand dollar headlight?! Whether you’re surprised by that price or not, it’s definitely attracting plenty of thieves.

The National Insurance Crime Bureau reported recently that late model vehicles, like the 2016 GMC Sierra shown in a price chart below, are loaded with expensive parts that are driving the black market.

“For the professional theft ring, stealing and stripping vehicles for parts has always been a lucrative business,” said NICB Senior Vice President and COO Jim Schweitzer. “On today’s cars and trucks, the parts are often worth more than the intact vehicle and may be easier to move and sell. That’s why we see so many thefts of key items like wheels and tires and tailgates … there’s always a market for them.”

Thefts of vehicles in the U.S. rose again last year by more than 4 percent, according to preliminary 2017 crime data from the FBI. Many of the vehicles that are recovered are missing wheels and rims or other key parts, while ones that are never recovered end up in chop shops where they are quickly dismantled and sold piece by piece.

The high prices that these parts command and the fact that they are harder to trace given the usual absence of VIN numbers, makes it more tempting for thieves to part-out stolen vehicles instead of selling them intact.

“It’s been a pretty steady stream of illicit parts for a long time and with popularity in pickups over the last several years, it’s not surprising to see their thefts increase as well,” said Frank Scafidi, NICB’s director of public affairs. “There are many of them more out there and so there are more targets of opportunity.”

Theft prevention, however, is frequently overlooked.

“Most of the things that people can do to prevent theft already come with the vehicle,” Scafidi said. “They just have to take the next step and deploy them. It’s just that simple. Lock them and don’t leave your keys laying around. Don’t invite theft from the inside by leaving something visible that could be attractive to a thief.”

The NICB looked at the cost of replacement parts for the top 10 stolen 2016 models. Average original equipment manufacturer (OEM) part prices were pulled from a database of over 24 million vehicle damage appraisals generated for insurance claims from 2016 and 2017. Parts such as bumpers, doors, fenders, hoods and headlights were on the list. Major components like the engine and transmission were not included. Posted below are prices on popular parts found on the 2016 GMC Sierra, one of the top 10 stolen 2016 models. 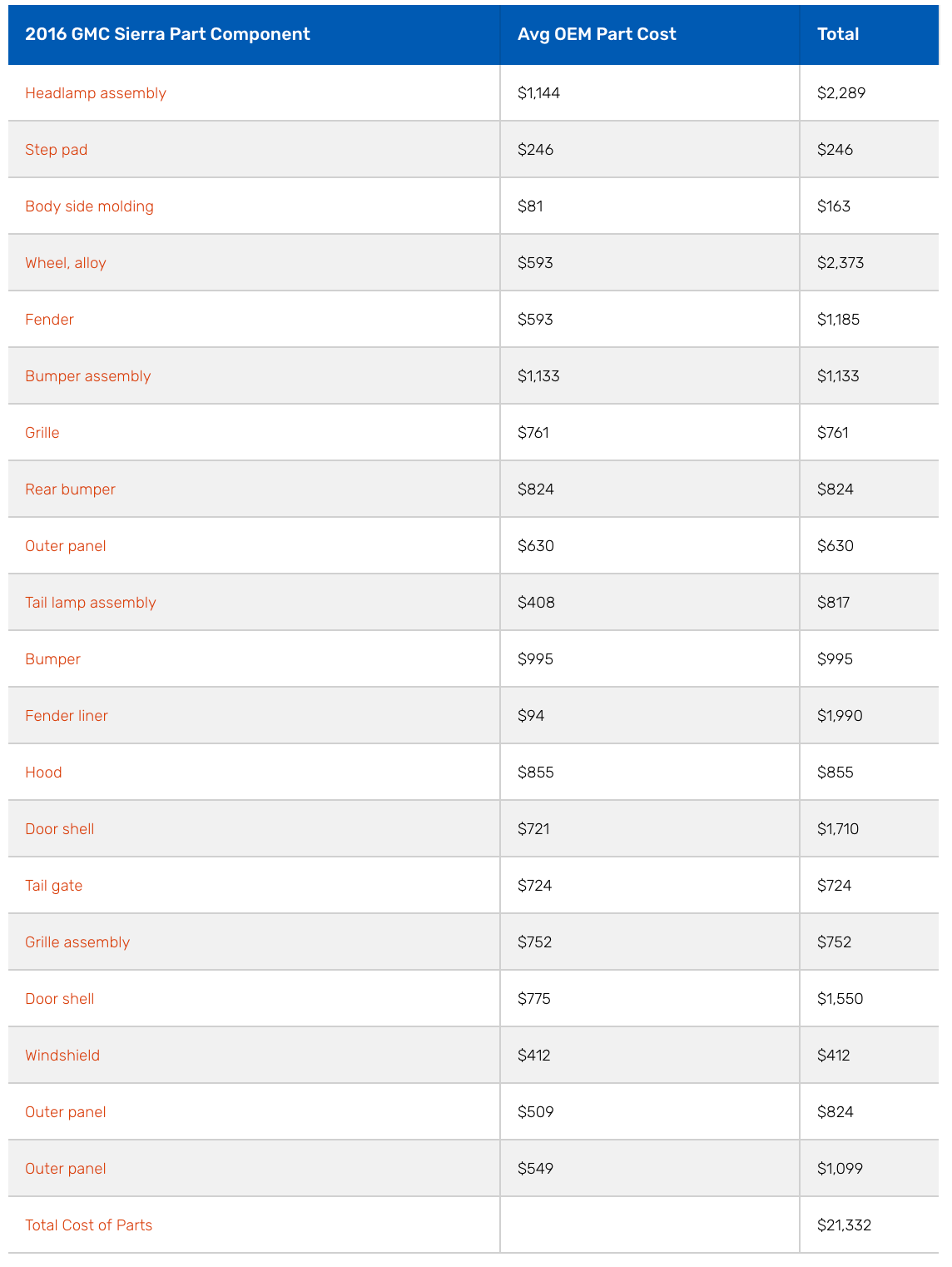