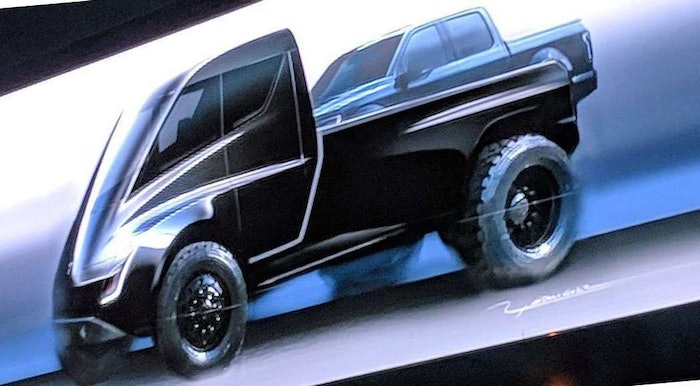 Just more than a month after rolling out a semi truck prototype – and with those orders stacking up – Tesla CEO Elon Musk tweeted Tuesday he is ‘dying’ to build a pickup.

Musk says development of a pickup is on deck behind the debut of Tesla’s Model Y, a small crossover built on the Model 3 platform. The truck, he says, would be similar in size to Ford’s F-150. “Maybe slightly bigger to account for a really gamechanging (I think) feature I’d like to add,” he tweeted to a followup question.

I promise that we will make a pickup truck right after Model Y. Have had the core design/engineering elements in my mind for almost 5 years. Am dying to build it.

Musk teased a pickup during the launch of the Tesla Semi in November, displaying a rendering of a Semi with a pickup bed, hauling another pickup.

Tesla’s Model Y doesn’t yet have a launch date, so would-be pickup buyers will have some time to save up.