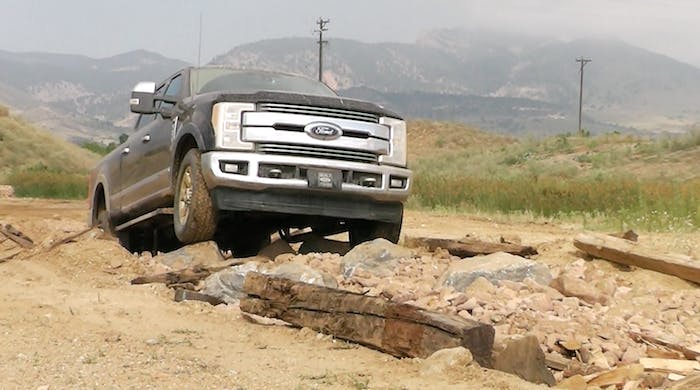 While riding on top of the hill, the engineer from Ford tells me to keep driving towards the boulder until it disappears from view.

It’s not the most comfortable feeling while driving a new 2017 F-250 FX4. I mean, you know the rock’s there and you don’t want to hit it, yet the man in charge riding shotgun says to keep heading straight towards it.

Fair enough. I’m going to blindly follow his lead—sort of. As I inch towards the obstacle, Ford Vehicle Integration Engineer Andre Kunynetz touches the 8-inch productivity screen and the boulder that I no longer see through the windshield now pops into view on the screen. 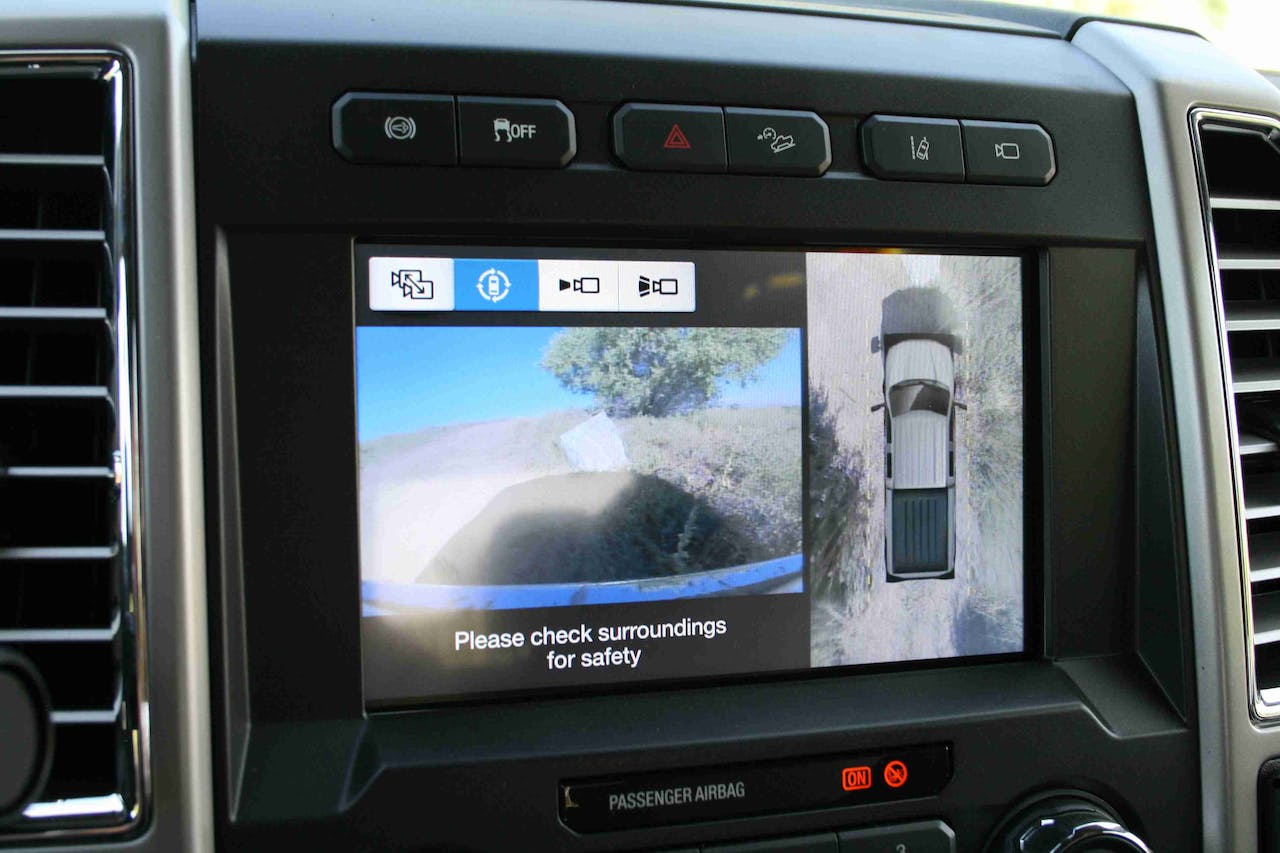 The 360 overhead view provides an accurate look at surrounding terrain.

Sensors coupled with three different viewing options of the surrounding terrain quickly put me at ease. I favor the 360 view because it provides an overhead shot of the truck along with the surrounding terrain, which includes bushes, a tree and a large rock. The sensors relay to the computer that I’m driving on a tight path with obstacles all around and displays the message on the screen: Please check surroundings for safety.

Without much of a hiccup, I’m now slowly driving while trading glances between the video and the windshield. It doesn’t take long at all to appreciate the all-new camera technology on the 2017 Super Duty line-up. Up to seven cameras are available, including a forward 180-degree view which is great for inching forward out of blind alleys or, in this case, negotiating a tight turn around a big rock.

“I love that overhead view,” I tell Kunynetz.

“Back to 360 (view) and you’re not going to hit the rock,” Kunynetz says while changing the view on the screen. “Yellow lines (on the screen) are the mirrors on the side of the vehicle.”

Shortly after I make a tight turn in front of the rock, we begin descending down a small grade.

“Can I use hill descent yet?” I ask Kunynetz.

“No, not yet. We’ve got it all figured out though, so that you can use all the goodies,” he says.

And he’s right. Ford’s off-road course, built on a mine reclamation site in Arvada, Colorado, is impressive. It includes mud holes, steep grades, tight turns and a rock crawl that looks like it will turn a floorboard into Swiss cheese (see video below). Kunynetz explains that it took about a week to make the course, which takes under 15 minutes to traverse, unless you stop for pictures like me.

The rock crawl is what really catches my attention. I realize that plenty of engineers developed the course, but the rocks and railroad ties made it seem like it was going to seriously beat-up the truck. 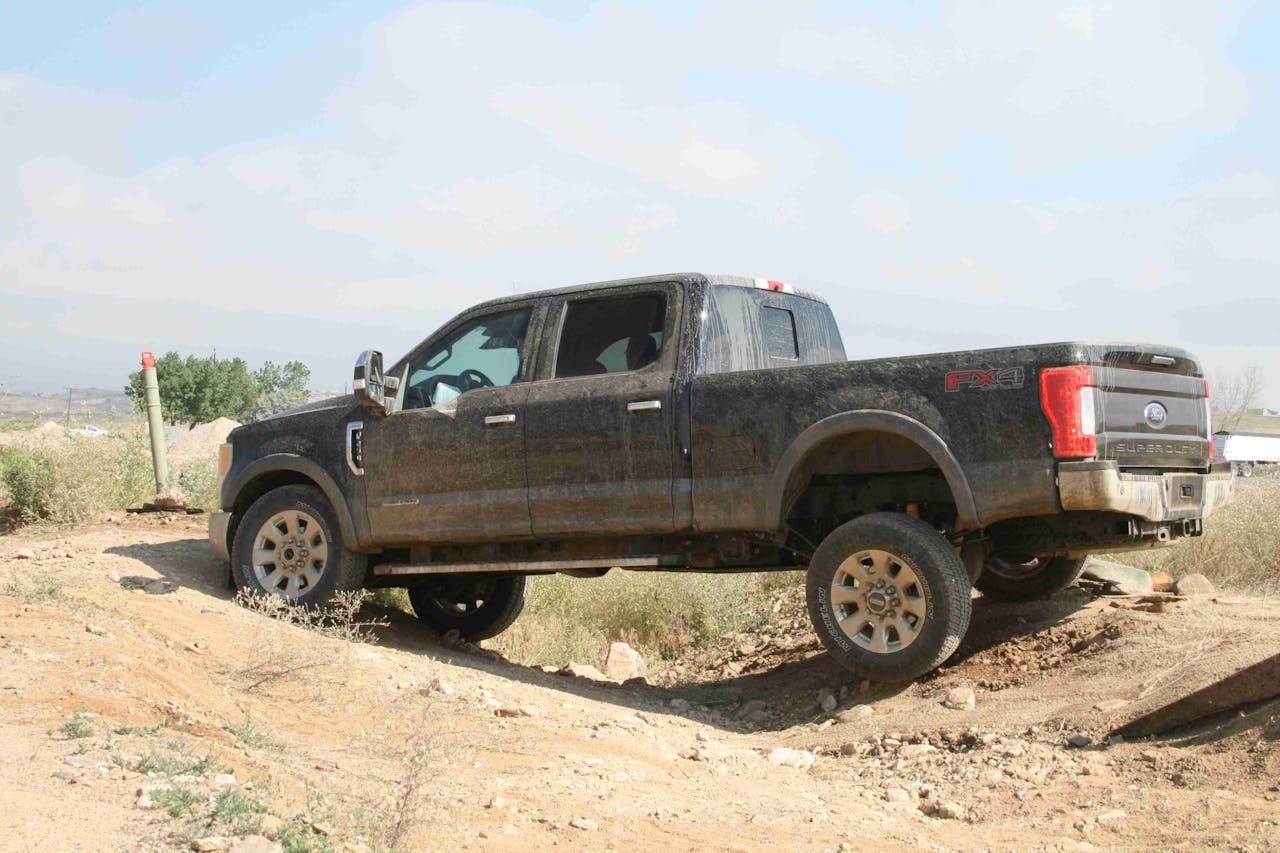 An electronic locking differential comes in handy, especially when one of the tires becomes airborne.

Following Kunynetz’ instructions, I stop the truck just before the intimidating pit where rocks jut out like small ice bergs. It looks like it was built more for a tank than a truck.

Admittedly, I hesitate and eye the pit suspiciously.

“We’re driving over this stuff?” I ask Kunynetz.

And so is the truck as we slowly make our way over the rocks and railroad ties. The right front tire lifts high and gives the newly designed chassis a slight-twist—or at least I imagine that anyway. The frame is made from 95 percent high strength steel, which is six times more than the prior model and it’s up to 24 times stiffer.

The 2017 Super Duty chassis is a beast. Reporters were given a chance to see one up close the day before during the introductory press conference for the Super Duty Next Level Media Drive.

Middle frame rails are 1.5-inch taller than previous models. It has up to 10 cross-members which are used to create a rigid latter structure.

The high-strength, aluminum-alloy body new for the 2017 Super Duty line-up shed roughly 700 pounds. Engineers took advantage of the weight loss and poured about 350 pounds back into the truck by beefing up such things like the chassis, the axles, the suspension, the driveline and the brakes.

As we slowly make our way through the rock crawl, the skid plate makes slight contact with a rock. A few more seconds of serious suspension testing and we’re through. It proves to be an impressive run. 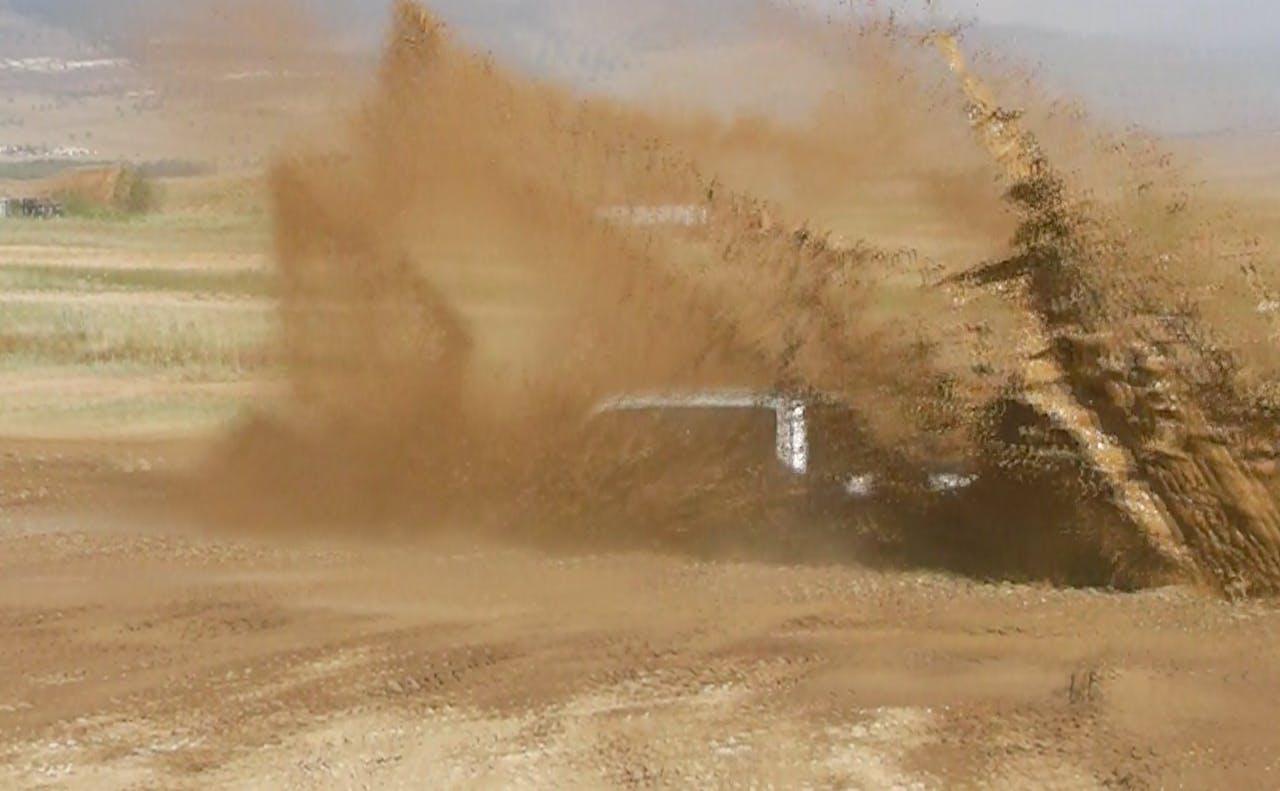 Kunynetz knows I’ve been anxious to test the hill descent control and that moment finally arrives. As we descend a dirt hill with a 23-degree grade, that feature steps up and slowly and quietly eases us to the bottom. It’s nice not hearing any brake chatter on the way down.

After reaching the bottom of the hill, the trail veers to the right and takes us back to the base of the hill a hundred feet or so from where we made our descent. Now, it’s time to go up.

“You’re going to pull your e-locker on for the hill climb,” Kunynetz explains. “Straight and up. Now, power up and when I say stop at the top, stop.”

The 6.7-liter turbo diesel engine paired up with a TorqShift 6-speed automatic transmission easily accelerates up the hill. After stopping at the top I ask Kunynetz about the grade.

“It’s actually steeper than the hill we just went down,” he says.

The end of the course comes like a grand finale—a deep mud hole that Kunynetz tells me to power through. Muddy water drenches the windshield as we come out on the other side.

The challenging course and the truck’s victory over same brings to mind what Craig Schmatz, Super Duty’s chief engineer, told reporters the day prior.

“We’ve tested this vehicle 12 million miles,” he told us. “That’s more than we’ve tested any other vehicle.”

The 2017 Super Duty is ready to take on plenty of work, no matter the terrain. 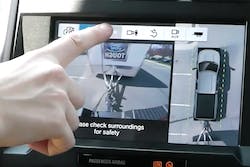 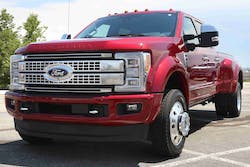 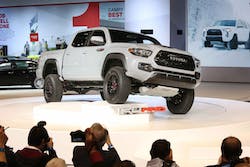 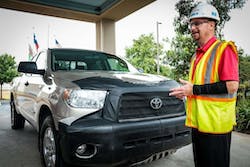 How ‘The Beast’ is helping Toyota engineers refine the new Tundra