More divorces probably begin at the boat ramp than any other place in America. When the husband asks the wife to back the truck down the ramp to launch the boat, things can, and do, get ugly.

Backing up a trailer can be tricky. The truck’s front wheels have to be turned the opposite direction the customer wants the trailer to go. Turn too hard and the trailer can hit the vehicle, or jackknife.

Whether working alone or with a spotter, backing up a trailer can be a tension-filled ordeal.

Now, after a decade of development, Ford has put a control knob on the dash of 2016 F-150s that takes that drama out of backing trailers.

The Pro Trailer Backup Assist, which was originally shown as a feature on the Ford Atlas Concept, has been added as an option on 2016 F-150 models and works by letting the customer steer the trailer with a control knob while the truck steers its wheels and limits vehicle speed.

If the driver wants the trailer to back straight, the knob is spring-loaded so that’s its natural “neutral” position. The driver just lets the truck do the work without touching the steering wheel. The truck and trailer back up in a straight line.

The result of the Pro Trailer Backup Assist option is less time required to back up a trailer with improved confidence – it even helps towing experts by reducing time lost to maneuvering mistakes.

“Pro Trailer Backup Assist is a smart solution to save time and increase productivity for our customers,” says Doug Scott, marketing manager, Ford Truck Group. “Instead of struggling to back up their trailer, they can spend more time on the job or enjoying the lake.”

Along the way, Ford earned five patents for the technology, with 10 more pending – and will probably save more than a few marriages. 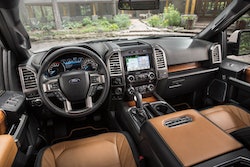 F-150 Limited Most Luxurious Ever 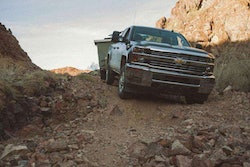 Couple strikes out on camping adventure in Silverado 2500 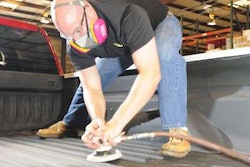 DIY: How to refurbish your pickup bed liner 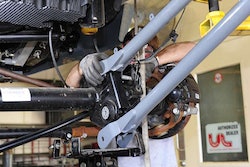