The new engine is powerful, fuel-efficient and high-tech. All attributes that we long for in a pickup used for both work and play.

But our day in the sun with Ford engineers and their new baby didn’t answer all our questions. The biggest ones being real-world fuel economy and the daily driving experience.

Well, after six months patiently waiting, we finally received a well-appointed EcoBoost F-150 Crew Cab 4×4 Lariat for our own testing. We spent a week putting more than 500 miles on it.

The EcoBoost, which was equipped with the optional 3.73 axle ratio, averaged 19.4mpg on our 105-mile Interstate test and 15.4mpg in suburban and city driving. Good numbers.

And we expect the EcoBoost would consistently deliver 2-4mpg better fuel economy than any of the other similarly geared V-8 competitors because of its displacement and technology.

As for pure get-up-and-go, the EcoBoost’s best 0-60mph sprint at Holiday Raceway (holidayraceway.com) took 6.9 seconds and blew through the 1/8th-mile traps in 9.9sec @ 74.5mph – the fastest numbers for any pickup we’ve tested to date.

The Ford’s lower axle ratio contributes to some of its speed. But it’s the way the V-6’s twin turbos spool up and pour on the power that makes the biggest difference; the baby turbos spool up fast and stay at full boost from about 1,800 to 5,500rpm.

Towing muscle also takes a nod to the F-150 EcoBoost. The EcoBoost is limited like all 1/2-tons to towing a maximum of 5,000 pounds on the hitch ball.

We’ve towed identical 24-foot, 6,700-pound box trailers behind Ford’s and competitor’s 5-liter pickups. The twin-turbo EcoBoost V-6 walks away from them all because it’s delivering more torque faster for a longer time, almost like a diesel.

Such performance should get the attention of anyone who uses 1/2-ton pickups for work, be it a self-employed landscaper or contractor with one truck to those who buy them by the dozens for their fleets.

The EcoBoost F-150 Lariat 4×4 is nicely appointed, nimble and responsive. Bumper to bumper it’s well engineered and thought out for a workingman’s pickup.

The optional Sony navigation/audio package ($2,495) is first class. The touch screen is big, the functions intuitive, the map system accurate even in rural areas and the sound quality superb for a pickup.

Compared to its Ram, Toyota, Nissan and GM competitors the F-150’s underpinnings feel less substantial; it reacts with noticeable suspension shudder over every frost heave, tar strip or irregularity on the road surface.

A good portion of that can be attributed to the “max tow package” with its firmer suspension. If you are not going to be towing smaller compact loaders, skid steers, RV trailers or heavily laden box trailers full of landscaping equipment or construction tools, the standard 9,700-pound towing package would deliver a nicer unloaded ride.

The Michelin P-metric street tires that came on this truck also contribute to that suspension jitteriness. They transmit a lot of road surface noise into the cab – and that noise switches level and pitch with every change in the road surface.

In fact, this F-150 is noticeably louder inside than either our Super Duty or GMC Sierra crew cab project trucks. (Our digital sound readings ranged from 69-71dB driving the Interstate test loop while the other pickups are in the 67dB range.)

Those nits aside, the EcoBoost V-6 is going to power a lot of Ford’s F-150 sales.

If you are one of those buyers, ditch the P-metric street treads for LT all-terrains, forgo the max tow package, and upgrade to 3.55 or 3.73 axle ratios with the limited-slip.

That setup will maximize the F-150 Crew Cab EcoBoost’ strong performance and make it sure to please the typical contractor and construction worker for many years.

By the Numbers (As Tested) 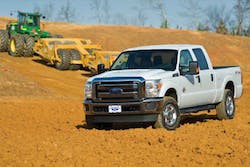