A hydrogen fuel cell generator is in the works for Hyliion’s recently announced Hypertruck ERX powertrain.

Hyliion Founder and CEO Thomas Healy told Hard Working Trucks’ sister publication, Commercial Carrier Journal, that his Texas-based company will be offering a fuel cell generator in addition to the natural gas generator that debuted with the prototype. The generator produces electricity for the truck’s electric drive motors and battery pack.

“We do have a partnership with Faurecia Symbio (based in France and co-owned by Michelin) where we are doing a hydrogen fuel cell vehicle because one of the fleets we work with said internally for them they set up a corporate initiative where they want to move to hydrogen,” Healy explained.

Hyliion has received requests for diesel and gasoline generators. Healy, 28, said they’re open to using other fuel sources. However, by using renewable natural gas, fleets can enjoy government incentives set aside for the carbon-negative fuel.

When fueled with RNG, Hypertruck’s carbon intensity score actually runs below zero. The California Air Resources Board reported in 2018 that RNG’s carbon intensity score was as low as -303.30 (based on an adjusted estimated energy efficiency ratio) while electric scored between +25 and +38.95. The reason? RNG is produced by capturing methane, a gas that CARB and the U.S. Environmental Protection Agency considers to be much more hazardous to the ozone layer than other gases such as CO2 and NOx.

RNG production captures methane that otherwise would have entered the atmosphere where the EPA says the gas is 21 times more harmful than carbon dioxide. Depending on the location, such as areas where air pollution is a concern, government incentives can reduce the cost of RNG below that of standard natural gas.

“There are a magnitude of different incentive opportunities,” Healy explained. “Ultimately, what it’s doing is driving the costs of RNG down. Actually, I was just on a call with a fleet that told us, as weird as this sounds, that they can actually source RNG for less money than they can actually source CNG. That has to go back to those emissions credits and savings and government incentives, which is kind of remarkable when you think about it. It’s like, ‘I can get a cleaner fuel. I can get it for less money.’ This is the perfect solution for fleets.”

“It will definitely reduce the brake wear and tear,” Healy said. “Overall, we expect it to have less maintenance than a diesel. That’s just one of the big benefits of an electric powertrain. There are less moving parts. You don’t have a transmission anymore. There are some things that you get to eliminate from the vehicle.”

When fueled with RNG, Hyliion believes the truck’s lower operational costs, its 1,300-mile range, established natural gas infrastructure and government incentives brought on by its negative carbon footprint will convince enough fleets to step up to the truck’s estimated $220,000 price tag.

Though he would not reveal the name of the manufacturer behind the natural gas engine currently powering the Hypertruck ERX prototype, Healy did say “We’re running about a 7.0-liter type size engine. That’s what we found is able to produce enough electricity to keep the batteries topped off and charged as you’re driving.”

Regardless of the generator used, “we’ve got more horsepower and torque than a conventional diesel truck,” Healy contends. “It’s really enjoyable to drive.”

Hypertruck will come with a charge port that allows the Toshiba lithium-titanate battery pack to be fast-charged in around 10 minutes “because we know there are some applications where recharging off the grid does make a lot of sense,” Healy said. Thanks to the truck’s onboard generator, battery size can be trimmed down to roughly one-tenth the size of a pack required for an electric truck that is powered exclusively by batteries.

“Our powertrain actually allows you to increase the payload capacity of the truck by a couple thousand pounds and you don’t have that range issue,” Healy said. “You’re bringing the fuel with you to produce the electricity as opposed to trying to fill the batteries up and drive all day.”

Hyliion is accepting reservations for $5,000 each, the proceeds of which help fund the development of the powertrain which is currently being tested in a Freightliner Cascadia day cab. A video below shows the truck doing a burnout.

The company also plans to leverage its long-standing partnership with supplier Dana Inc. The Hypertruck ERX will feature Dana’s electric motor, inverter and axle technologies, and Dana plans to provide its manufacturing capabilities to support Hyliion in reaching series production of its powertrain systems. Initial Hypertruck ERX fleet demonstration vehicles have been allocated to customers for delivery in 2021, with series shipments scheduled for 2022. 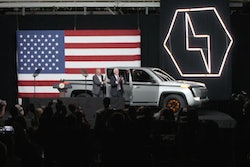 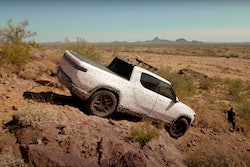