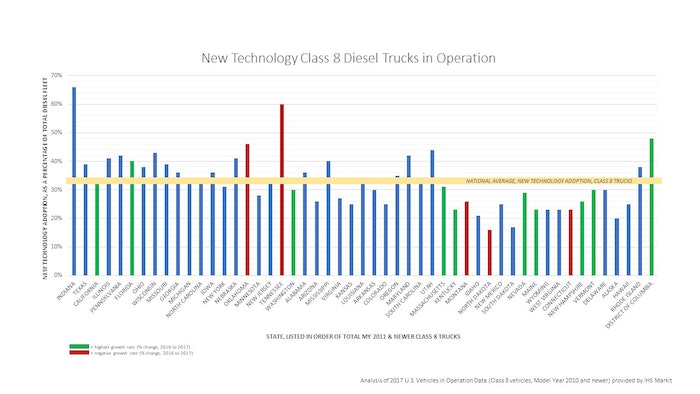 Even with interest bubbling in electromobility as a greener method of transportation, clean diesel engines continue to size chunks of highway marketshare.

According to new research from the Diesel Technology Forum, Class 3-8 trucks model years 2011 and newer made up 36 percent of all commercial trucks on the road at the end of last year – a jump of 6 percent over 2016 and more than 10 percent higher than 2015.

According to the report, only about 21 percent of all commercial trucks Class 3-8 use gasoline, and about 4 percent use “other” fuels. Natural gas accounts for less than 1 percent.

“On average, truckers saved $2,600 in fuel, which adds up to 138 million barrels of crude oil – that’s 50 percent of the entire U.S. Strategic Petroleum Reserve, saved by just a few thousand trucks,” he adds.

According to Fleet Advantage’s latest Truck Lifecycle Data Index, the newest Class 8 diesel trucks can save truckers up to $26,600 in fuel costs over a 2012 model – a 7.9 percent increase in savings, despite a higher average diesel price.

Indiana and Tennessee have the highest percentage of new-generation Class 8 diesel trucks at 66 percent and 60 percent, respectively. Florida, with a growth of 81 percent over 2016, has fastest-growing heavy duty clean diesel fleets by a wide margin.