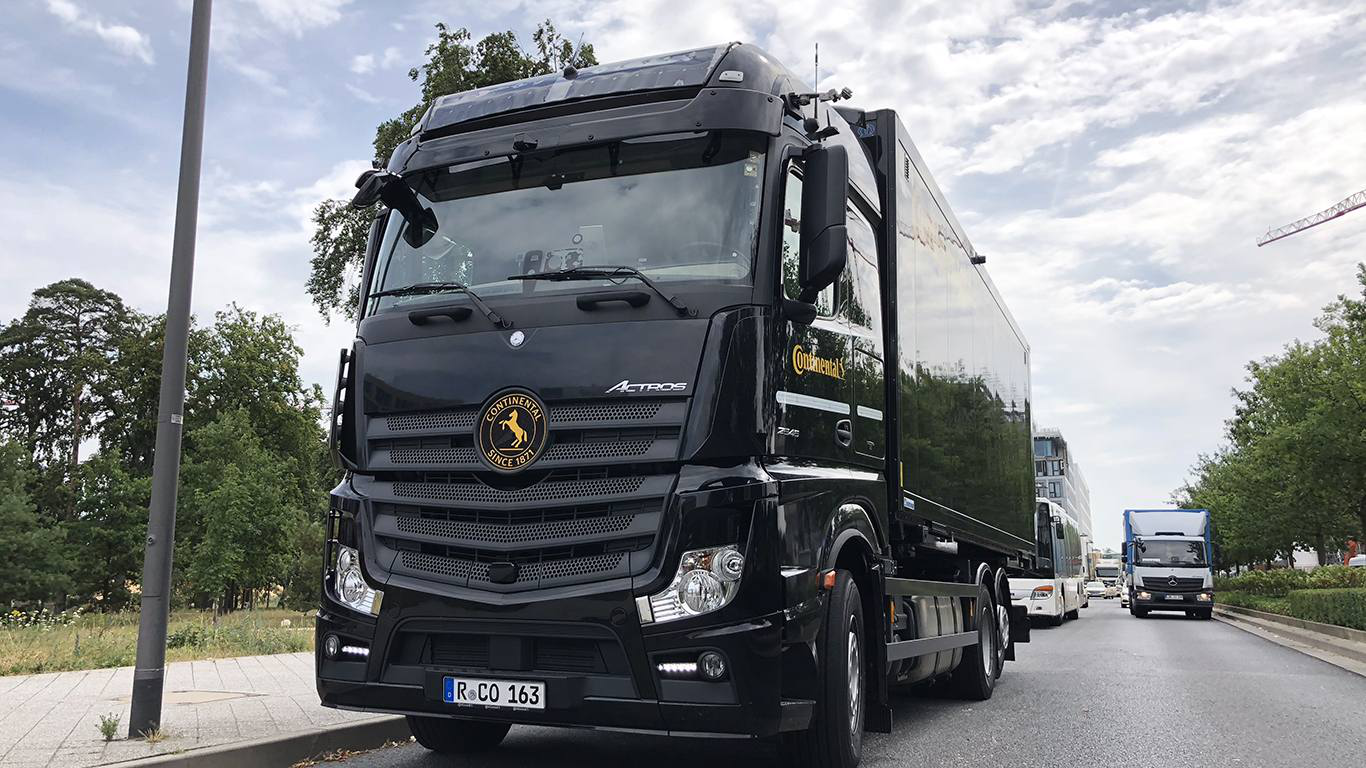 Continental’s Innovation Truck, a 2014 Mercedes Actros, is used to both test and showcase vehicle tech in the works by the German component and tire supplier.

Continental this week outlined a roadmap to what it envisions as the future of freight transport, teasing technologies it says offer near-term benefits like fuel savings and crash prevention and, longer-term, are building blocks to fully autonomous trucks.

The German-based tire and component supplier provided a two-day preview in Frankfurt, Germany, of systems it plans to more fully debut later this year at the IAA Commercial Vehicle show in Hannover, Germany. Some of the platforms are ready for deployment in Europe in the coming years. Others are still in development, slated for implementation in the coming decade.

Researchers and futurists for the company outlined at the global event a trucking industry that is grappling with increasing freight demand due to population growth, efficiency-draining congestion and ever-tightening emissions standards — hurdles the industry must address in the coming decade, says Michael Ruf, head of commercial vehicles and aftermarket for Continental.

Answers to these weighing — and worsening — issues lie within modern tools like connectivity, big data and the “enormous” computational power of today’s computers, he says. “There are three areas that will influence trucking, let’s say, in 2028. The first is making much more utilization out of cargo space. Space waste is a waste of efficiency and fuel, producing unnecessary emissions of CO2. The second is journey enhancement through real-time data. And the third of course is autonomous driving.” 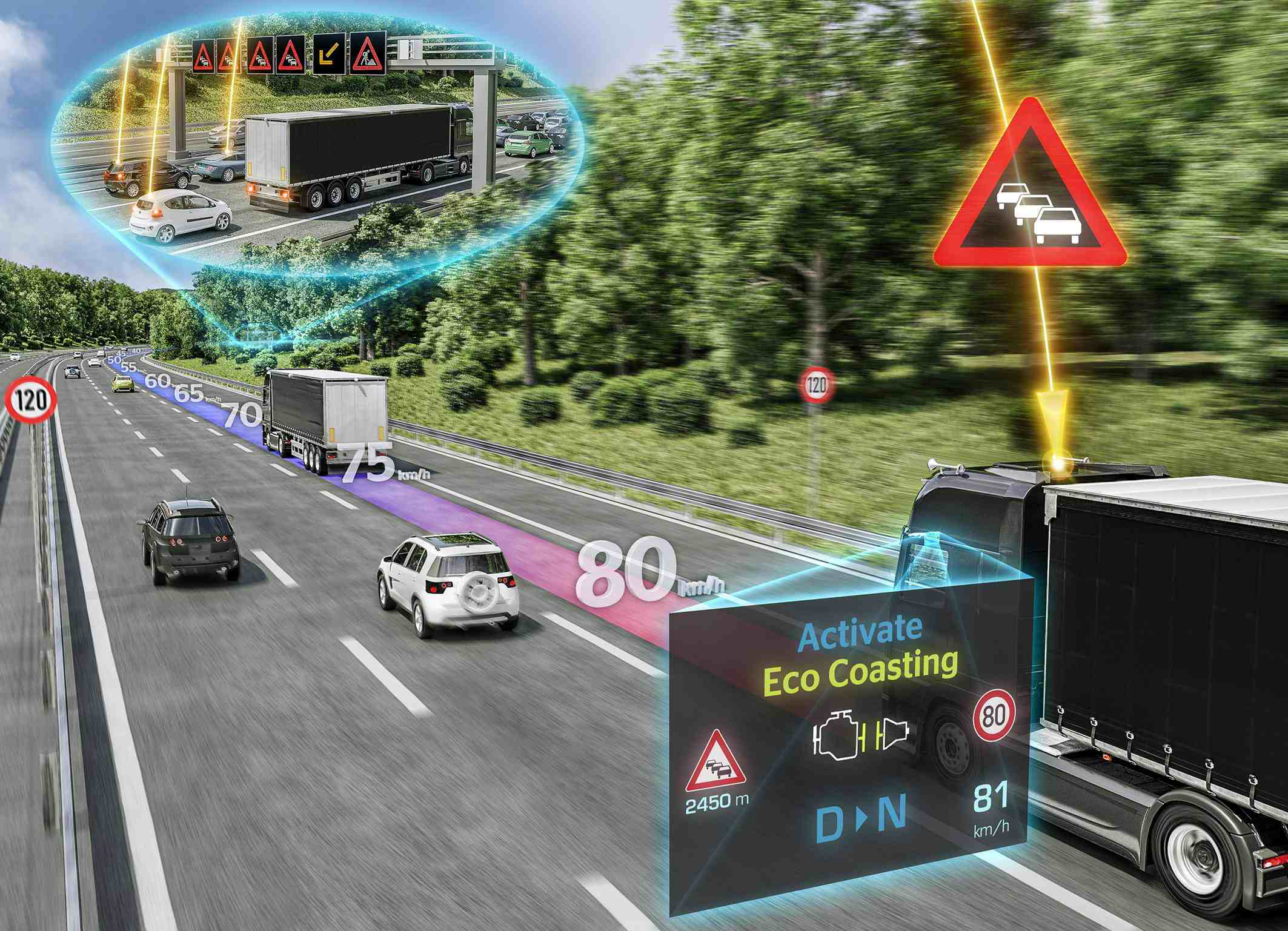 One such system previewed by the company, the Dynamic eHorizon platform, uses multiple streams of real-time data to see the miles of highway ahead and detect looming congestion or other events. Though still in development, the system could underpin highly automated trucks in the coming years, says Continental’s Raimund Varnhagen, head of the eHorizon group. “If trucks could get real-time information on the road ahead, if they could see traffic jams, accidents, roadwork, slippery roads before they come, the vehicle could prepare its speed and coasting according to the topology and conditions,” he said.

In the meantime, as the system is deployed in non-autonomous vehicles, it could help fleets reduce brake wear, cut fuel use and avoid collisions via its coasting and braking functions, he says.

The system uses feeds of static data and dynamic data to read the highway. Static information includes information like mapping and speed limits, while dynamic information includes all daily variables: traffic, accidents, weather and roadwork. The data, some of which is gleaned through crowd-sourcing applications, is transmitted in real-time from a cloud-based system to the truck. The system can see about a half a mile ahead, and traffic information is updated every 60 seconds. 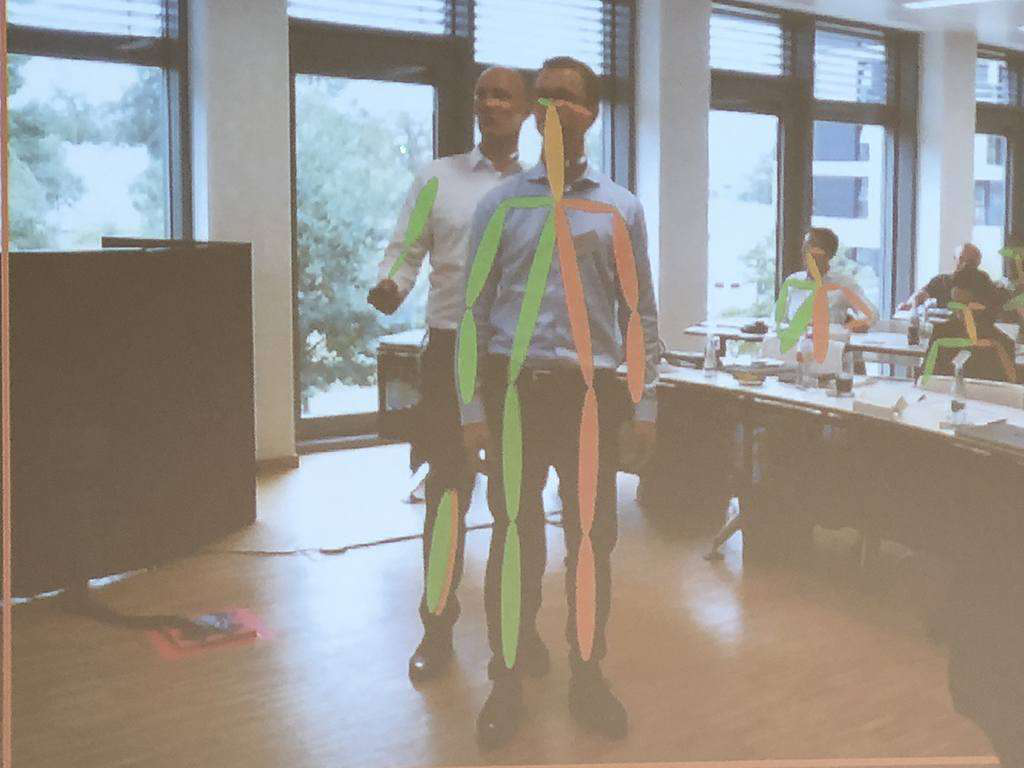 Continental developed an artificial intelligence program that can detect pedestrians and cyclists. Seen here is a preview of the system shown to the global trucking trade press this week in Frankfurt, Germany. The system identifies limbs and joints and outlines them as shown here. The AI is the technology that made Continental’s Right-Turn Assist system possible. The system is slated for introduction in the European market in 2023.

Continental didn’t say when the system would come to market, but early versions of the eHorizon have been in use in Europe since 2016. In that time, says Varnhagen, European fleets have saved about a billion Euros in fuel costs.

Another system, Right-Turn Assist, relies on sensors like radar and a bevy of cameras to read a truck’s surroundings. An artificial intelligence platform developed by Contintenal then is able to detect pedestrians and cyclists — its primary function to prevent truck strikes while taking right turns across walkways and bike paths.

Contintenal developed the platform due to the high number of such strikes across busy urban areas in Europe and as a response to looming European Union regulations that could require the technology. The Right-Turn Assist first warns drivers if it detects a potential pedestrian or cyclist strike, but could intervene with active braking if the driver fails to. 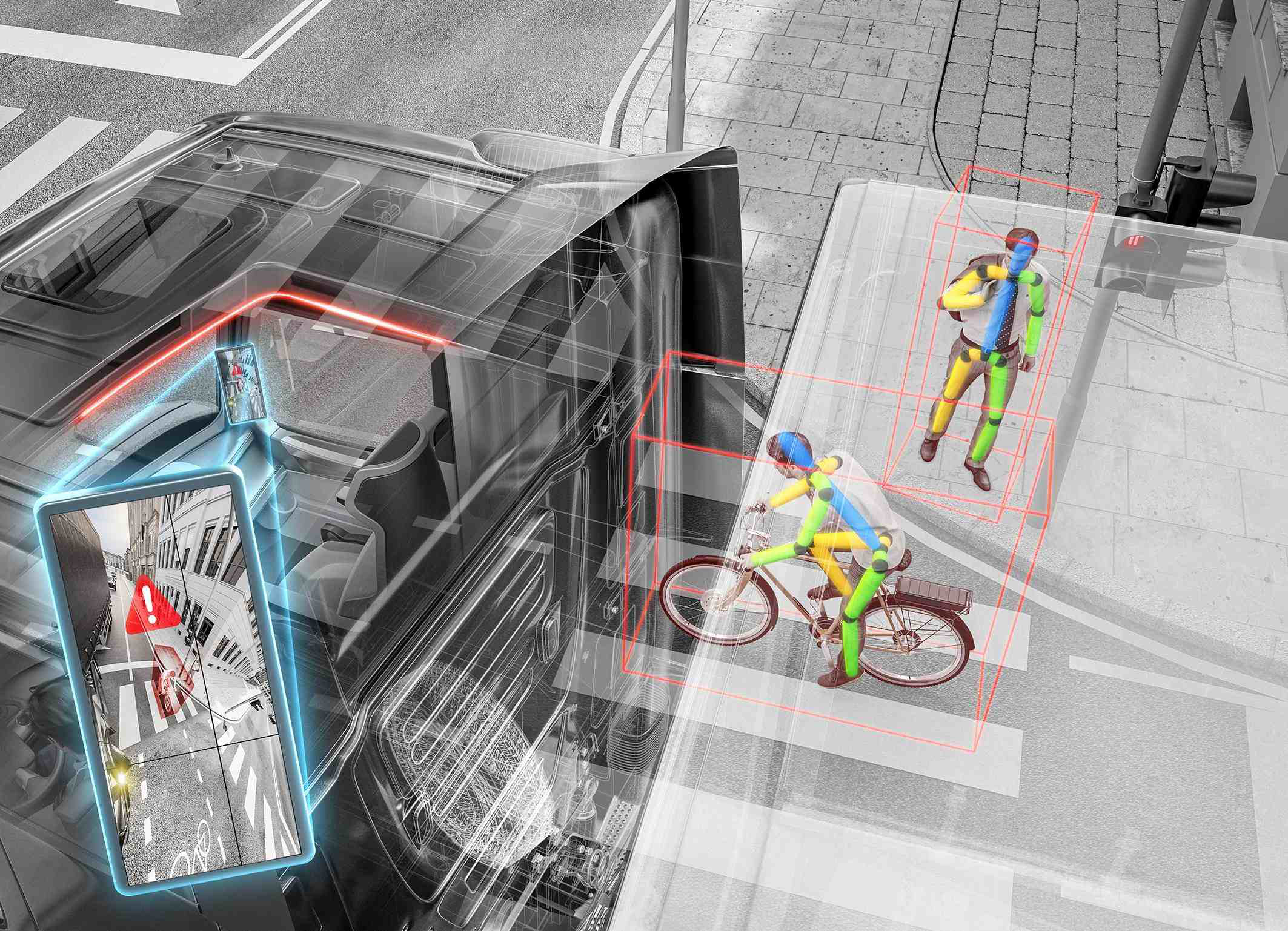 A rendering of Continental’s person-finding artificial intelligence program. The system uses radar and cameras as sensory inputs, and an AI program detects pedestrians and cyclists around the vehicle.

Like the eHorizon platform, Right-Turn Assist and the artificial intelligence behind it are other building blocks for autonomous trucking.

Ruf envisions Level 4 autonomous vehicles being deployed in real-world use by the late 2020s. Level 4 automated vehicles require a driver, but little driver input. The business case for automated trucks is too strong to ignore, he says, as fleets will likely see lower fuel costs and fewer crashes with the deployment of highly automated trucks. They also could present a path toward easing the industry’s lingering need for more drivers, he notes.

James Jaillet is the senior editor for Overdrive and the Commercial Carrier Journal. 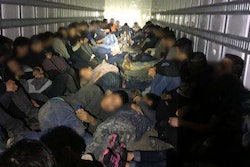 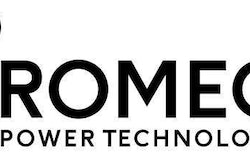 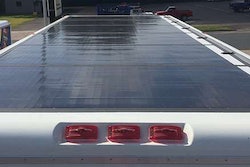 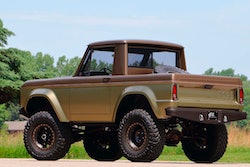