Another question regarding a surge in electric vehicle deployment is whether the power infrastructure, even with development of new recharging or battery swapping points, will have the capacity to handle it.

“There is no good scientific consensus on what the grid can handle for electric vehicles or electric trucks,” Li says. It largely depends “on what we assume about when people will charge their trucks,” she says.

Electric power demand surges in the mornings when people begin their day, and in the evenings when people return from work, Li says. These demands can vary regionally because of time zones, climate factors and whether heating and cooling systems run on electricity or natural gas.

Grid capability is something Thor is working to figure out, says company co-founder Gio Sordoni. He believes the grid has plenty of capacity to charge trucks as long as much of the charging takes place during non-peak demand times.

He also envisions a system in which trucks returning to charging terminals with half-charged batteries can sell that power to the grid during peak hours. “Managing loads has to do with how you shave off those peaks,” he says.

Energy storage systems will play a role in that, he says. Megabatteries could siphon excess electricity from the grid during non-peak hours and store that electricity to charge trucks later, which could stabilize the rates truckers pay. These storage systems could be public or established at carrier terminals.

Like Li, he sees dynamic pricing as a means to ward off charging during peak hours. “If you plug in at 5 p.m., through software we can say, ‘Hey, this is peak charging time. You don’t want to pay these rates.’ ”

Using renewables such as solar or wind to power a charging station also could ease concerns about grid capacity. “Tesla has been putting a lot of hints out that they’re looking for their charging stations to be solar-powered,” says Ruan’s Jim Cade, whose fleet has reserved five Tesla Semis. “Take a UPS or a FedEx that has a hub in a metro area. If all the vehicles come back and plug in, it’s going to dim the lights. Solar, if it’s able to do the job, would be a better answer.” 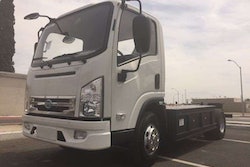