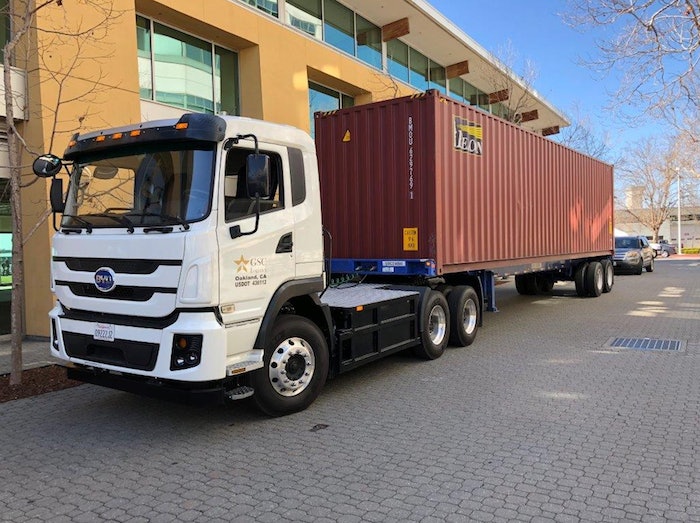 The Port of Oakland recently welcomed its first battery-powered drayage truck and is eager to see how it measures up against its diesel-powered counterparts as the port continues to strive for lower emissions.

But no one’s more interested in the $250,000 truck than its owner, GSC Logistics. The BYD 8TT cab-over, which has a 100-mile range, will be used on short haul runs during a three-year trial. If testing proves successful, GSC said it would consider acquiring three additional trucks.

“We’re making four-to-five runs a day within the port’s perimeter and so far, the truck’s performing well,” said GSC Logistics CEO Scott Taylor. “Our next step will be to get it out on the road.”

The 10-ton rig, manufactured at BYD’s plant in Lancaster, Calif., has a GCWR of 105,000 pounds. It’s the only electric truck alongside more than 6,000 diesel-powered vehicles registered at the port.

“We’ll be following this experiment closely,” said Richard Sinkoff, the port’s director of environmental programs and planning. “If battery-powered vehicles can do the job efficiently and affordably, they can help change the way we do business.”

The port has reduced diesel emissions 98 percent in the past decade through clean truck programs and plans to update its Maritime Air Quality Improvement Plan this summer with an emphasis on zero-emissions technology. However, according to the port, battery-powered equipment designed for container handling isn’t readily available.

While GSC Logistics moves the equivalent of 120,000 20-foot cargo containers annually through Oakland, its electric truck will be mostly confined to the yard.

“The electric truck will be used primarily for intra-port activity, i.e., container moves between the ocean terminals and the rail yards at the Port of Oakland, as well as the terminals, rail yards, and GSC Logistics facility within the Port of Oakland,” said Andy Garcia, executive vice president and chairman at GSC Logistics. “Subsequently, the truck will be utilized for container moves within 25 miles from the port.  However, at this stage, intra port activity will be the operational program assigned to the electric truck.”

The BYD 8TT has a top speed of 56 mph and is powered by lithium-ion batteries which take about two hours and 45 minutes to recharge at 80kW. Max torque is rated at 2,212 lb.-ft. and max horsepower is 482.

GSC acquired the truck through a grant program managed by Bay Area Air Quality Management office and the California Air Resources Board.