Autonomous brakes reduce casualties in terrorist truck attack, may be required in Australia

Terrorist truck attacks and road safety concerns has led to a push for mandated autonomous braking systems in Australia.

Australian Senator Alex Gallacher told parliament recently that the Muslim terrorist who drove a truck through a Christmas market in Berlin last December could have killed and injured more people if it wasn’t for the truck’s autonomous braking system.

Anis Amri, 24, killed 12 people and injured 56 more before the truck’s autonomous brakes engaged and brought him to a stop about 230 to 260 feet after striking his first victim. German officials credited the truck’s automatic emergency braking system for stopping the truck and preventing more casualties.

“According to our current state of investigation, the lorry was brought to a full stop after about 70 to 80 meters by an automatic emergency braking system thereby preventing even graver damage,” Frauke Koehler, a spokeswoman for German prosecutors, told reporters during a press conference 10 days following Amri’s murderous rampage on Dec. 19.

The braking system, which is activated after sensing a collision, was adopted by the European Union in 2012, according to The Telegraph.

By comparison, the truck used by a Muslim terrorist to mow down Bastille Day attendants last July in Nice, France was older and not equipped with such a system. Eighty-six people were killed in that attack and 434 injured.

For Gallacher, the evidence is pretty clear.

“One was fitted with autonomous braking technology and that mitigated the disaster. It mitigated the number of people that this terrorist could actually run over. The other truck was not fitted with autonomous braking technology and the casualties were five times greater,” Gallacher told parliament in March.

Gallacher was speaking on behalf of the Australasian College of Road Safety, which had recently presented parliament with its plans for improving road safety, including requiring automatic emergency braking and lane departure warning.

“We should do it not just for terrorism reasons but also to assist in the 45,000 hospitalizations and 1,300 deaths annually as a result of road crashes,” ACRS President Lauchlan McIntosh told foxnews.com.

Twenty automakers representing 99 percent of the vehicles sold in the U.S. agreed last year to make automatic emergency braking (AEB) standard by September 1, 2022, according to the National Highway Traffic Safety Administration (NHTSA) and the Insurance Institute for Highway Safety (IIHS). 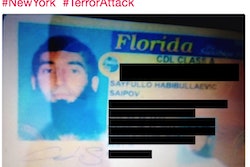