Revolutionary? The Fun Trucks Friday staff can’t imagine a better way to spend Independence Day than to let someone else do our work for us – even though this is work we wouldn’t mind too much: Spending the 4th of July in Germany covering the reveal of Daimler’s prototype autonomous truck.

But Jack Roberts, our most experienced big truck journalist, got the call and he reports the self-driving system is dubbed Highway Pilot.

The fully-functioning autonomous rig operates at real-world speeds on a special section of the Autobahn outside of Magdeburg. Daimler said the autonomous truck could be ready for real-world deployment by 2025.

Daimler is quick to point out that these new “truck autopilot” systems do not diminish or eliminate the role of the truck driver, but rather turn him or her from a “trucker” to a “transport manager.”

Daimler claims its new system, once fully fleshed out and in real-world use, will offer drivers an “attractive mobile workplace offering scope for new professional skills.”

Meaning, while on the road, they can turn to their laptops to look for another job? Just kidding.

We like the idea of being reporters who don’t have to report.

Jack’s original story is over on CCJ, and below Jack talks a little about the demonstration. The rest of his video blog is here.

For Daimler’s own explanation of what it’s like to work in the cab of a self-driving truck, here’s that part of the press packet. 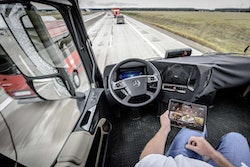 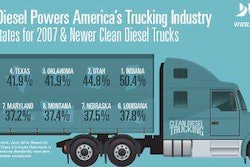 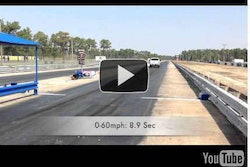 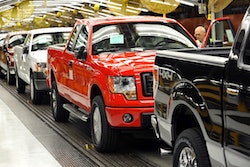 Ford F-150 at the top of American-Made Index