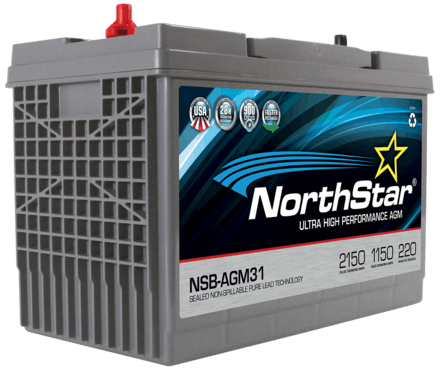 (HWT Note: This is the first part in a three part series on understanding 12-volt batteries, which includes tips on improving battery function and longevity).

It’s always nice talking to an expert. To that end, Hard Working Trucks wants to thank Jeremy Cordray, electrical engineer and west region manager at NorthStar Battery Company, for taking the time to pass along his insights and advice on 12-volt batteries.

HWT: Battery terminals can often become corroded. What causes this corrosion and how can it be prevented?

Cordray: Corrosion is made up of mainly calcium oxide.  Most batteries manufactured for vehicles today utilize calcium to provide structural integrity to the plates inside the battery.  During the cycling of these batteries, the battery will have a corrosion build-up inside the battery.  This is termed “grid growth” and there exists the potential of this corrosion growing out of the battery around the terminals.  Corrosion is resistance in any electrical circuit and thus a build-up of corrosion at the terminals of any battery will hinder the performance of the circuit.  The most effective prevention of the presence of corrosion is the elimination of calcium in the manufacturing of the battery.  This is not common, but “pure lead” Absorbed Glass Mat (AGM) batteries utilize mechanical compression instead of calcium for structural integrity and therefore do not present corrosion.  Also, there are some batteries manufactured with antimony instead of calcium, but this is no longer common in the automotive market due to the increase of gassing that antimony causes.

HWT: What’s the best way to clean up terminals and battery posts that have become dirty and/or even corroded?

Cordray: The best clean up tool for cleaning dirt and/or corrosion from battery terminals and connections is a simple wire brush.  Most newer vehicles prevent the battery from getting dirty with a cover or battery box.  Unfortunately for a battery that has shown corrosion, it will most likely return and therefore a perpetual maintenance of the terminals and connectors is required to prolong the life and performance of the battery.

HWT: Vehicle technology is more sophisticated now than ever before. Battery terminal connections that may look fine, may in fact be faulty and present issues for sensitive vehicle components and computers. With that in mind, how important is it to maintain solid terminal connections to a vehicle battery?