Tactical green and a cushy seat.

Those were the first two things that struck me about the 2022 Nissan Frontier Pro-4X.

As I walked towards the crew cab I wasn’t too impressed with the exterior color. It just seemed too green. Once I sat down inside the truck that color vanished as I realized that I was sitting in one of the most comfortable pickup seats I've experienced yet.

Yes, the seat’s six-way power adjustments are nice and so is the Pro-4X stitching, but it was the base of the leather-appointed seat that got my attention. It was a bullseye between cushy marshmallow and great-granny’s stiff high back chair with scant Depression-era padding.

I also discovered that I could get extra lumbar support for my worn-out back by moving a lever on the side of the seat. Nice! Aside from the color, the Pro-4X was off to a sound start.

Next, it was time to crank up the 310-hp 3.8-liter V6 that has the most horsepower in its class. It sounded good but a road test would have to show just how fast this revamped midsize could get up and go.

As it turns out, it’s not so great. Maybe the 9-speed JATCO transmission hasn’t been calibrated quite right to take advantage of all that horsepower. Even with traction control off, I couldn’t get the truck to bark the tires.

That’s not a deal killer for acceleration and in fact for some owners looking to keep things at a safer pace, that might be the way to go. I did notice that the truck accelerated nicely when my foot eased into the pedal as opposed to stomping it.

Also that porky V6 went past its EPA-rated 22 mpg highway and delivered 24.2 mpg highway during a 136-mile round trip with three adults and the A/C blasting in the Florida heat. About ten of those miles involved city driving.

Don’t get me wrong. Acceleration was not a hindrance. I was able to pass comfortably in traffic and churn out some mud in the off-road course. But on the street, the 2022 Frontier just didn’t present the kind of exciting surge I had been hoping for in a midsize that’s nailed the top spot in horsepower.

Of course, I have to keep in mind that the 2022 Frontier does not claim best in class torque. For midsize pickups, that distinction goes to GM in both the Chevy Colorado and GMC Canyon which when equipped with the 2.8-liter turbo diesel churn out 181-hp and 369 lb.-ft. torque. The Frontier lags behind at 281 lb.-ft. which doesn’t make it a party pooper. In fact, I walked away thinking that it’s a fun truck both on and off-road.

It’s fairly easy to get accustomed to the tech inside the 2022 Frontier Pro-4X. Some vehicles blow you away with buttons and have you thinking about the cockpit in the Space Shuttle. I’m here to drive a truck and get it dirty not jettison into space.

There are enough high-tech features in the Pro-4X that definitely win me over. Tops on the list is the $990 technology package. Safety is everything and that’s what you get with features like lane departure warning, blind spot warning, intelligent cruise control, rear cross traffic alert, rear sonar system, rear automatic braking and high beam assist.

I was impressed with all of those capabilities both on- and off-road where pets, people, trees and bushes can pose more problems. In this case, rear automatic braking kicked in when I was backing up on a tight trail towards a pile of branches and palm leaves. While out of sight in my rear view, the truck’s sonar and back-up camera picked up on the stack. As I edged closer to the pile, an audible warning sounded off before the truck came to an automatic stop. Nice! That’s the kind of feature you want when backing in reverse particularly on a trail where obstacles like tree stumps and branches may be impossible to see in the mirror.

While driving on-road, blind spot warning, lane departure warning and intelligent cruise control proved to be my favorites. Warnings are nice particularly if you’re getting ready to change lanes only to find that someone has snuck up in your blind spot. The Pro-4X also gives a slight vibration, or haptic warning, if the truck veers out of its lane.

Intelligent cruise control offers three pacing distances between the you and the vehicle out front. That came in handy during highway driving. The truck accelerated, decelerated and braked when necessary to maintain that pre-set buffer. However, if you don’t want any of those settings just turn them off.

Of course every drive is made better with a music unless it’s one of the times when conversation is in order, and even then, I like to have some background music on. Try playing Metallica’s “Back to the Front,” for instance, when having a challenging, motivational talk with the kids—just kidding. Whatever your musical tastes, or your kids, the Fender Premium Audio system will not disappoint.

My family agrees that the stereo rocks thanks to ten speakers including a well-placed woofer under the rear seat. (For the uninitiated, a woofer is not a dog; it’s a base speaker that delivers low notes with some dipping below 20hz which you can’t hear but feel instead.)

Tap into your phone’s tunes following an easy Bluetooth hook-up through NissanConnect which works with both Apple CarPlay and Android Auto. The 9-inch touchscreen makes selections easy and allows you to consider more options than you’ll know what to do with even though you know it’s cool they’re there just in case.

Remember when I said that I wasn’t crazy about the color tactical green on the 2022 Nissan Frontier Pro-4X? Well, that all changed when I took the truck off-roading among the endless trees and bushes in Panama City, Fla. When I got out to shoot pictures, it was obvious that the truck was at home in Northwest Florida. Not sure how that might look in the desert, but it looks good here.

The sport bar in the bed adds another nice outdoor cue along with the Hankook all-terrain Dynapro AT2 tires wrapped around 17-inch black alloy wheels. They not only look ready for serious fun, they can also deliver a convincing bite in the dirt. I cranked out some doughnuts in the mud in four-wheel-high and the tires handled it well.

The Pro-4X likes to play in the dirt. With my course—at least when it hasn’t been turned into a swamp with a torrential downpour—it’s seldom necessary to take it out of four-wheel high and that was the case while I had the Pro-4X.

A shift-on-the-fly four-wheel-drive system equipped with a two-speed transfer case ate up the dips and mud. Billstein off-road shocks made for a comfortable, exciting ride while the stereo pumped out Heart’s “Barracuda.” Off-roading with Fender’s Premium Audio System cranks up the fun.

Hankook all-terrain Dynapro AT2 tires wrapped around 17-inch black alloy wheels provide an aggressive profile and a convincing bite in the dirt. I cranked out some doughnuts in the mud in four-wheel-high and the tires handled it well.

Hill descent control paved the way for a comfortable downhill ride and kept the truck at around 4mph while I steered through the course. The truck stopped accelerating when I cranked the wheel sharply to make a tight turn. I nudged the pedal softly and the Pro-4X continued on its way.

Forward-facing and overhead camera views on the 9-inch center display came in handy while negotiating a narrow portion of the course. The view cuts out around 6 mph.

If things get really hairy, it’s nice to know that you can always lock the rear differential and drop it into four-wheel-low. Still, keep in mind that you’re not exactly riding in your cousin’s jacked up pickup. With roughly 9 ½ inches of ground clearance, you may find yourself putting those aluminum and steel skid plates to work if you’re not careful. For that reason, I avoided driving over Sir Humpington which is slightly over ten inches high. Full size trucks don’t have a problem traversing this hump while midsize trucks do.

Fun inside and out

Having people pile up inside a midsize truck like the 2022 Frontier Pro-4X may seem like a chore, but it’s not. After pushing the front passenger seat forward to accommodate a 6-foot, 4-inch passenger in the back, we headed out for what would be a fun and comfortable ride.

Opening up the auto-tilt and slide sunroof lets that Florida sunshine inside and so long as the right Bluetooth connection is on—mine—you can let the best tunes in the world play while cruising down the road along these scenic bays and bayous.

Rear charging ports alongside a 110-volt plug allow passengers in the rear to charge up. Nissan Connect provides Wi-Fi Hotspot+ to keep everyone happy.

The 60/40 rear bench seat flips up to provide storage. However, storage on the left side becomes home to a base speaker box when equipped with the Fender Premium Audio System. The sacrifice in storage is worth it.

Heated outside mirrors, heated steering and heated front seats deliver additional comfort when needed. The wireless phone charger does a good job powering up your phone even if it’s covered by a thick OtterBox like mine.

Outside the truck, more impressive options are on display including under rail LED lighting and spray-in bedliner in the truck bed. The Utili-track System found on big brother Titan offers four adjustable tie-down cleats. A 110-volt plug in the right rear corner of the bed offers up to 400 watts of power.

Besides providing a fun time off road, the 2022 Nissan Frontier Pro-4X is right at home on the road where it provides peace of mind with additional safety features like automatic emergency braking with pedestrian detection and intelligent forward collision warning.

With an MSRP hovering near $47,000, it’s a lot to pay for a truck as my kids pointed out that doesn’t get leather seats nor a power adjustable front passenger seat. That one can be adjusted manually four ways. 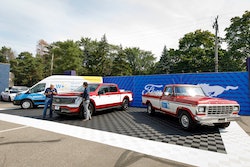 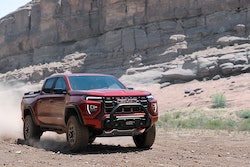 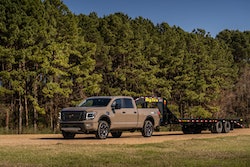