Walmart fleet rolling out 'cleanest combustion engine in the world' 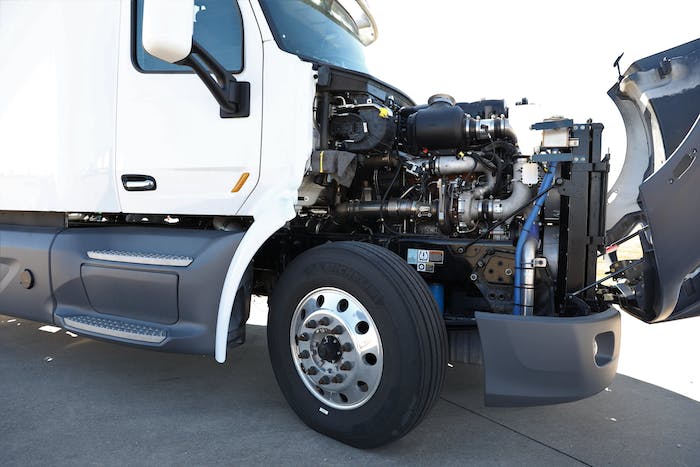 The Achates 10.6-liter two-stroke, opposed-piston engine shown in a Peterbilt 579 which Walmart will roll out for a demo that's set to begin in July in Southern California. Though the engine is taller than a conventional four-stroke, Achates is confident that it will prove to be a good fit for other Class 8 OEMs.
Achates Power

At a time when heavy-duty internal combustion is frequently castigated in the shadow of zero-emission all-electric and fuel cell powertrains, a leading non-profit clean transportation group is lavishing praise on an oil burner that has shown the ability to meet the nation’s toughest emissions standards six years ahead of schedule.

Emissions-minded CALSTART, based in Southern California with locations in Colorado, Florida, Michigan and New York, recently heralded the impressive emissions gains of a 10.6-liter opposed-piston engine from Achates Power, which will soon hit the road in a Walmart fleet truck.

The Ultra-Low NOx Heavy-Duty Truck Demonstrator program is part of California Climate Investments. CALSTART is managing the project, which includes collecting and analyzing emissions and performance data in a Peterbilt 579 that’s been equipped with the innovative and cost-minded two-stroke that’s designed to replace 13- and 15-liter four-stoke diesels that may prove too pricey for some fleets to upgrade to meet 2027 emissions standards.

Results from dynos in San Diego and Detroit, along with a test mule 579 in Denton, Texas, have left CALSTART cheering for cleaner internal combustion as fleets consider more sustainable powertrain solutions.

During a recent online presentation focusing on the Achates 10.6-liter and its upcoming demo program scheduled to take place in Southern California from July through September, CALSTART Executive Vice President Bill Van Amburg called the engine “the cleanest combustion, lowest carbon combustion engine in the world.”

Though the tall 10.6-liter can achieve the California Air Resource’s Board ultra-low NOx standard of 0.02 grams per brake horsepower hour and meet EPA’s 2027 CO2 requirement, Amburg pointed out that it was still viewed as a bridge to zero emissions.

“At the end of the day, our goal is zero emissions and zero carbon but it’s a long pathway there and we need all the tools in the tool chest to get there, and that’s why we’re so excited about this heavy-duty opposed-piston engine project,” he said. “It’s showing tremendous results. Better than we first thought.”

And those results can get even better, according to Achates Chief Technical Officer Fabien Redon. A leaner burning attribute inherent with engine design makes it ideal for gaseous fuel use such as renewable natural gas and hydrogen.

Like its smaller 2.7-liter sibling, the 10.6-liter is also a candidate for gasoline compression ignition.

“It's not something that we've tested yet [on the 10.6], but we know how to do gasoline compression ignition and it can easily be done,” explained Achates Executive Vice President of Business Development Larry Fromm, who also heads the company’s commercial office.

“You might find the ability to buy a low octane gasoline and get a huge cost savings,” Fromm said. “The idea of being able to operate gasoline in a heavy-duty engine very efficiently and very clean with high torque is perfect for that application. So we think that it'll be a really good application of gasoline compression ignition even for the commercial vehicle space.”

“The future is carbon constrained, and we’ll need a full range of fuels and technologies to meet the climate change challenge, including diesel, and products like those from Achates that are innovative and deliver more important benefits in a smaller package,” Schaeffer said.

“These days there are many who seem to question the very future of the internal combustion engine,” Schaeffer continued. “I think Achates 10.6-liter diesel will go a long ways of proving them wrong, that there is still plenty of innovation and efficiency gains and even lower emissions in this case with unconventional design.”

Building on an impressive past
Opposed-piston, two-stroke engines are nothing new — they were just relegated to a distant backseat as emissions regulations tightened through the years and made the engines appear seemingly out of reach of any clean tech advancements.

But not everyone kicked the old workhorse to the curb. The late James Lemke, physicist and internal combustion innovator, thought the tech deserved another look and began R&D efforts, which were supported by late Walmart heir John Walton. The two engine enthusiasts piloted their own planes and knew full well that one of the longest flights powered by internal combustion was held by an opposed-piston, two-stroke diesel.

Lemke and Walton appreciated the engine’s efficiency and power and thought it possible to improve emissions so they co-founded Achates Power in 2004 to do just that. 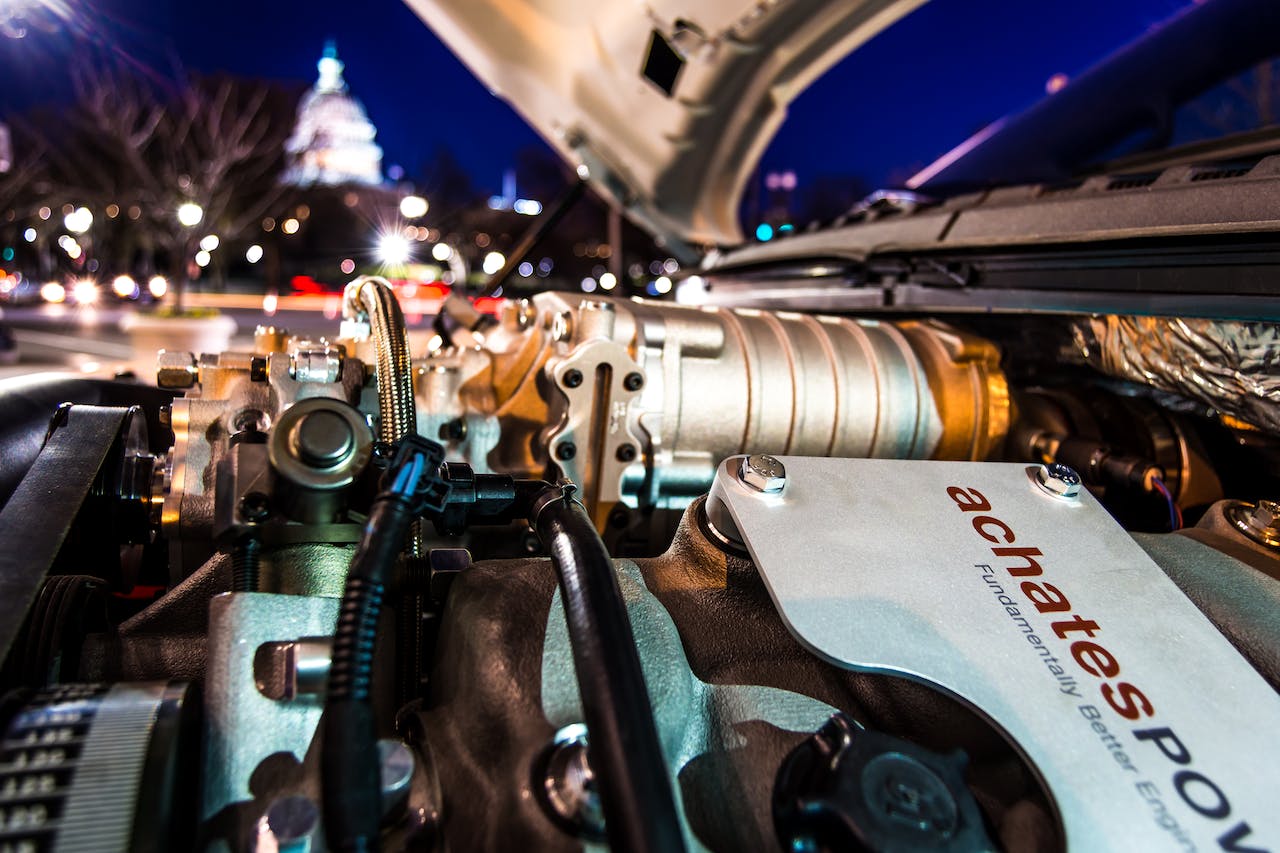 No stranger to opportunities, Achates Power partnered with Aramco to bolt this 2.7-liter opposed-piston, two-stroke in a Ford F-150. Though the engine can run on diesel, Achates is more excited about its knack for gasoline compression ignition.Achates PowerSeventeen years later, their mission lives on with steady performance gains, which eventually caught the attention of Saudi Aramco’s U.S.-based subsidiary Aramco Services Company. The two inked a partnership in 2018 to develop a series of opposed-piston engines.

One Achates 10.6-liter is being tested on an Aramco dyno in Detroit while another resides on an Achates’ dyno in San Diego. A Peterbilt 579 in Denton, Texas, has served as a tester for a phase one 10.6-liter. The 579 rolling out in July for Walmart will be an improved phase two.

“The better, more recent results — the 7% reduction in CO2 and a 96% reduction in NOx – those are from the phase two engine which has an upgraded air system,” Fromm explained.

“This engine is rated at about 400 horsepower for this project but the capability is higher than that,” Fabien said.

While official fuel efficiency numbers aren’t available yet, Fromm said miles per gallon “will be at least 7% better because that's the kind of CO2 improvement we're seeing on the dyno.”

The 10.6-liter is bolted to a conventional underfloor aftertreatment system with SCR. Because of its more fuel-efficient, opposed-piston design, the engine does not require a valve train which reduces complexity along with material and production costs.

“We can see from analysis and studies that we’ve done based on published data that we expect the new opposed-piston engine base cost will be about $10,000 less at the 2027 emissions level compared to the solutions that the four-stroke engine will need to deploy to achieve that performance,” Fabien said.

According to Achates’ website, conventional four-stroke diesels will have to rely on costlier and more complex technologies to meet 2027 emissions such as cylinder deactivation, dual zone SCR and 48-volt electric heaters.

“The cost is in relationship with the complexity,” Fabien said.

Achates, which teamed up with Cummins to produce and test a 14.3-liter tank engine, is currently seeking additional partners to bring the 10.6-liter to production. The engine is expected to hit the market in time for the 2027 emissions regs.

“We want to pull together a consortium of companies and some engine makers,” Van Amburg said. “But we need to move it into a rapid piloting stage — move from the demo stage to pilot.” 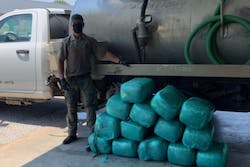 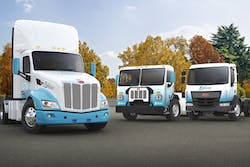 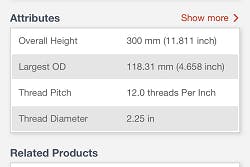 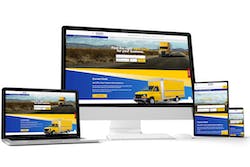